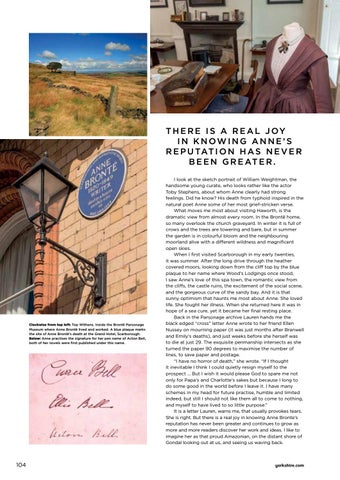 Clockwise from top left: Top Withens. Inside the Brontë Parsonage Museum where Anne Brontë lived and worked. A blue plaque marks the site of Anne Brontë’s death at the Grand Hotel, Scarborough. Below: Anne practises the signature for her pen name of Acton Bell, both of her novels were first published under this name.

I look at the sketch portrait of William Weightman, the handsome young curate, who looks rather like the actor Toby Stephens, about whom Anne clearly had strong feelings. Did he know? His death from typhoid inspired in the natural poet Anne some of her most grief-stricken verse. What moves me most about visiting Haworth, is the dramatic view from almost every room. In the Brontë home, so many overlook the church graveyard. In winter it is full of crows and the trees are towering and bare, but in summer the garden is in colourful bloom and the neighbouring moorland alive with a different wildness and magnificent open skies. When I first visited Scarborough in my early twenties, it was summer. After the long drive through the heather covered moors, looking down from the cliff top by the blue plaque to her name where Wood’s Lodgings once stood, I saw Anne’s love of this spa town, the romantic view from the cliffs, the castle ruins, the excitement of the social scene, and the gorgeous curve of the sandy bay. And it is that sunny optimism that haunts me most about Anne. She loved life. She fought her illness. When she returned here it was in hope of a sea cure, yet it became her final resting place. Back in the Parsonage archive Lauren hands me the black edged “cross” letter Anne wrote to her friend Ellen Nussey on mourning paper (it was just months after Branwell and Emily’s deaths), and just weeks before she herself was to die at just 29. The exquisite penmanship intersects as she turned the paper 90 degrees to maximise the number of lines, to save paper and postage. “I have no horror of death,” she wrote. “If I thought it inevitable I think I could quietly resign myself to the prospect ... But I wish it would please God to spare me not only for Papa’s and Charlotte’s sakes but because I long to do some good in the world before I leave it. I have many schemes in my head for future practise, humble and limited indeed, but still I should not like them all to come to nothing, and myself to have lived to so little purpose.” It is a letter Lauren, warns me, that usually provokes tears. She is right. But there is a real joy in knowing Anne Bronte’s reputation has never been greater and continues to grow as more and more readers discover her work and ideas. I like to imagine her as that proud Amazonian, on the distant shore of Gondal looking out at us, and seeing us waving back.