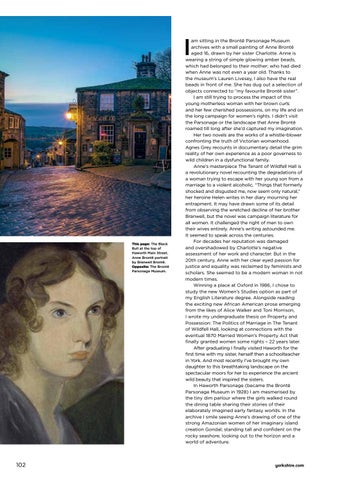 This page: The Black Bull at the top of Haworth Main Street. Anne Brontë portrait by Branwell Brontë. Opposite: The Brontë Parsonage Museum.

am sitting in the Brontë Parsonage Museum archives with a small painting of Anne Brontë aged 16, drawn by her sister Charlotte. Anne is wearing a string of simple glowing amber beads, which had belonged to their mother; who had died when Anne was not even a year old. Thanks to the museum’s Lauren Livesey, I also have the real beads in front of me. She has dug out a selection of objects connected to “my favourite Brontë sister”. I am still trying to process the impact of this young motherless woman with her brown curls and her few cherished possessions, on my life and on the long campaign for women’s rights. I didn’t visit the Parsonage or the landscape that Anne Brontë roamed till long after she’d captured my imagination. Her two novels are the works of a whistle-blower confronting the truth of Victorian womanhood. Agnes Grey recounts in documentary detail the grim reality of her own experience as a poor governess to wild children in a dysfunctional family. Anne’s masterpiece The Tenant of Wildfell Hall is a revolutionary novel recounting the degradations of a woman trying to escape with her young son from a marriage to a violent alcoholic. “Things that formerly shocked and disgusted me, now seem only natural,” her heroine Helen writes in her diary mourning her entrapment. It may have drawn some of its detail from observing the wretched decline of her brother Branwell, but the novel was campaign literature for all women. It challenged the right of men to own their wives entirely. Anne’s writing astounded me. It seemed to speak across the centuries. For decades her reputation was damaged and overshadowed by Charlotte’s negative assessment of her work and character. But in the 20th century, Anne with her clear eyed passion for justice and equality was reclaimed by feminists and scholars. She seemed to be a modern woman in not modern times. Winning a place at Oxford in 1986, I chose to study the new Women’s Studies option as part of my English Literature degree. Alongside reading the exciting new African American prose emerging from the likes of Alice Walker and Toni Morrison, I wrote my undergraduate thesis on Property and Possession: The Politics of Marriage in The Tenant of Wildfell Hall, looking at connections with the eventual 1870 Married Women’s Property Act that finally granted women some rights – 22 years later. After graduating I finally visited Haworth for the first time with my sister, herself then a schoolteacher in York. And most recently I’ve brought my own daughter to this breathtaking landscape on the spectacular moors for her to experience the ancient wild beauty that inspired the sisters. In Haworth Parsonage (became the Brontë Parsonage Museum in 1928) I am mesmerised by the tiny dim parlour where the girls walked round the dining table sharing their stories of their elaborately imagined early fantasy worlds. In the archive I smile seeing Anne’s drawing of one of the strong Amazonian women of her imaginary island creation Gondal; standing tall and confident on the rocky seashore, looking out to the horizon and a world of adventure.