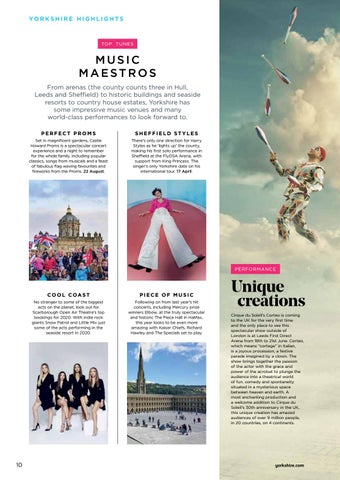 MUSIC MAESTROS From arenas (the county counts three in Hull, Leeds and Sheffield) to historic buildings and seaside resorts to country house estates, Yorkshire has some impressive music venues and many world-class performances to look forward to. PERFECT PROMS

Set in magnificent gardens, Castle Howard Proms is a spectacular concert experience and a night to remember for the whole family. Including popular classics, songs from musicals and a feast of fabulous flag waving favourites and fireworks from the Proms. 22 August.

There’s only one direction for Harry Styles as he ‘lights up’ the county, making his first solo performance in Sheffield at the FlyDSA Arena, with support from King Princess. The singer’s only Yorkshire date on his international tour. 17 April.

No stranger to some of the biggest acts on the planet, look out for Scarborough Open Air Theatre’s top bookings for 2020. With indie rock giants Snow Patrol and Little Mix just some of the acts performing in the seaside resort in 2020.

Following on from last year’s hit concerts, including Mercury prize winners Elbow, at the truly spectacular and historic The Piece Hall in Halifax, this year looks to be even more amazing with Kaiser Chiefs, Richard Hawley and The Specials set to play.

Unique creations Cirque du Soleil’s Corteo is coming to the UK for the very first time and the only place to see this spectacular show outside of London is at Leeds First Direct Arena from 18th to 21st June. Corteo, which means “cortege” in Italian, is a joyous procession, a festive parade imagined by a clown. The show brings together the passion of the actor with the grace and power of the acrobat to plunge the audience into a theatrical world of fun, comedy and spontaneity situated in a mysterious space between heaven and earth. A most enchanting production and a welcome addition to Cirque du Soleil’s 30th anniversary in the UK, this unique creation has amazed audiences of over 9 million people, in 20 countries, on 4 continents.