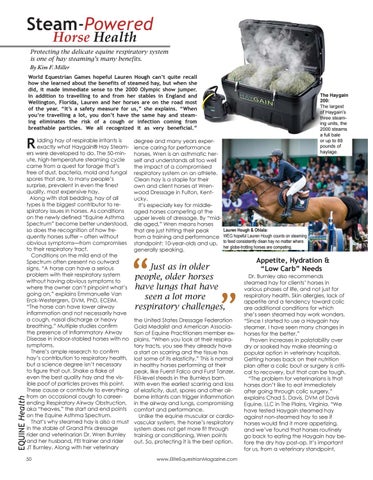 Protecting the delicate equine respiratory system is one of hay steaming’s many benefits. ���������������� World Equestrian Games hopeful Lauren Hough can’t quite recall how she learned about the benefits of steamed hay, but when she did, it made immediate sense to the 2000 Olympic show jumper. In addition to travelling to and from her stables in England and Wellington, Florida, Lauren and her horses are on the road most of the year. “It’s a safety measure for us,” she explains. “When you’re travelling a lot, you don’t have the same hay and steaming eliminates the risk of a cough or infection coming from breathable particles. We all recognized it as very beneficial.”

idding hay of respirable irritants is exactly what Haygain® Hay Steamers were developed to do. The 50-minute, high-temperature steaming cycle came from a quest for forage that’s free of dust, bacteria, mold and fungal spores that are, to many people’s surprise, prevalent in even the ﬁnest quality, most expensive hay. Along with stall bedding, hay of all types is the biggest contributor to respiratory issues in horses. As conditions on the newly deﬁned “Equine Asthma Spectrum” become better understood, so does the recognition of how frequently horses suffer – often without obvious symptoms—from compromises to their respiratory tract. Conditions on the mild end of the Spectrum often present no outward signs. “A horse can have a serious problem with their respiratory system without having obvious symptoms to where the owner can’t pinpoint what’s going on,” explains Emmanuelle Van Erck-Westergren, DVM, PhD, ECEIM. “The horse can have lower airway inﬂammation and not necessarily have a cough, nasal discharge or heavy breathing.” Multiple studies conﬁrm the presence of Inﬂammatory Airway Disease in indoor-stabled horses with no symptoms. There’s ample research to conﬁrm hay’s contribution to respiratory health, but a science degree isn’t necessary to ﬁgure that out. Shake a ﬂake of even the best quality hay and the visible poof of particles proves this point. These cause or contribute to everything from an occasional cough to careerending Respiratory Airway Obstruction, aka “heaves,” the start and end points on the Equine Asthma Spectrum. That’s why steamed hay is also a must in the stable of Grand Prix dressage rider and veterinarian Dr. Wren Burnley and her husband, FEI trainer and rider JT Burnley. Along with her veterinary

degree and many years experience caring for performance horses, Wren is an asthmatic herself and understands all too well the impact of a compromised respiratory system on an athlete. Clean hay is a staple for their own and client horses at Wrenwood Dressage in Fulton, Kentucky. It’s especially key for middleaged horses competing at the upper levels of dressage. By “middle aged,” Wren means horses that are just hitting their peak from a training and performance standpoint: 10-year-olds and up, generally speaking.

The Haygain 200: The largest of Haygain’s three steaming units, the 2000 steams a full bale or up to 88 pounds of haylage.

Just as in older people, older horses have lungs that have seen a lot more respiratory challenges,

the United States Dressage Federation Gold Medalist and American Association of Equine Practitioners member explains. “When you look at their respiratory tracts, you see they already have a start on scarring and the tissue has lost some of its elasticity.” This is normal in healthy horses performing at their peak, like Fuerst Falco and Furst Tanzer, FEI-level steeds in the Burnleys barn. With even the earliest scarring and loss of elasticity, dust, spores and other airborne irritants can trigger inﬂammation in the airway and lungs, compromising comfort and performance. Unlike the equine muscular or cardiovascular system, the horse’s respiratory system does not get more ﬁt through training or conditioning, Wren points out. So, protecting it is the best option.

Dr. Burnley also recommends steamed hay for clients’ horses in various phases of life, and not just for respiratory health. Skin allergies, lack of appetite and a tendency toward colic are additional conditions for which she’s seen steamed hay work wonders. “Since I started to use a Haygain hay steamer, I have seen many changes in horses for the better.” Proven increases in palatability over dry or soaked hay make steaming a popular option in veterinary hospitals. Getting horses back on their nutrition plan after a colic bout or surgery is critical to recovery, but that can be tough. “The problem for veterinarians is that horses don’t like to eat immediately after going through colic surgery,” explains Chad S. Davis, DVM of Davis Equine, LLC in The Plains, Virginia. “We have tested Haygain steamed hay against non-steamed hay to see if horses would ﬁnd it more appetizing, and we’ve found that horses routinely go back to eating the Haygain hay before the dry hay post-op. It’s important for us, from a veterinary standpoint,