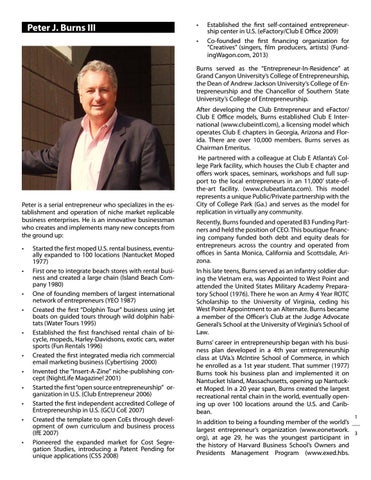 Peter is a serial entrepreneur who specializes in the establishment and operation of niche market replicable business enterprises. He is an innovative businessman who creates and implements many new concepts from the ground up: • • • • • • • • • • •

He partnered with a colleague at Club E Atlanta’s College Park facility, which houses the Club E chapter and offers work spaces, seminars, workshops and full support to the local entrepreneurs in an 11,000’ state-ofthe-art facility. (www.clubeatlanta.com). This model represents a unique Public/Private partnership with the City of College Park (Ga.) and serves as the model for replication in virtually any community. Recently, Burns founded and operated B3 Funding Partners and held the position of CEO. This boutique financing company funded both debt and equity deals for entrepreneurs across the country and operated from offices in Santa Monica, California and Scottsdale, Arizona. In his late teens, Burns served as an infantry soldier during the Vietnam era, was Appointed to West Point and attended the United States Military Academy Preparatory School (1976). There he won an Army 4 Year ROTC Scholarship to the University of Virginia, ceding his West Point Appointment to an Alternate. Burns became a member of the Officer’s Club at the Judge Advocate General’s School at the University of Virginia’s School of Law. Burns’ career in entrepreneurship began with his business plan developed in a 4th year entrepreneurship class at UVa.’s McIntire School of Commerce, in which he enrolled as a 1st year student. That summer (1977) Burns took his business plan and implemented it on Nantucket Island, Massachusetts, opening up Nantucket Moped. In a 20 year span, Burns created the largest recreational rental chain in the world, eventually opening up over 100 locations around the U.S. and Caribbean.

In addition to being a founding member of the world’s largest entrepreneur’s organization (www.eonetwork. 3 org), at age 29, he was the youngest participant in the history of Harvard Business School’s Owners and Presidents Management Program (www.exed.hbs.

edu/programs/opm/). Along with the long list of accomplishments, Burns has been featured in scores of publications, radio interviews and televisions including The Arizona Republic, CNN, Fox Business, Entrepreneur Magazine, the Phoenix Business Journal, The State Press, USA Today and The Wall Street Journal. ACCOLADES AND HONORS: • • • • • •

Peter J. Burns III, has started, bought and sold and operated well over the hundred businesses or enterprises In literally dozens of places in markets.