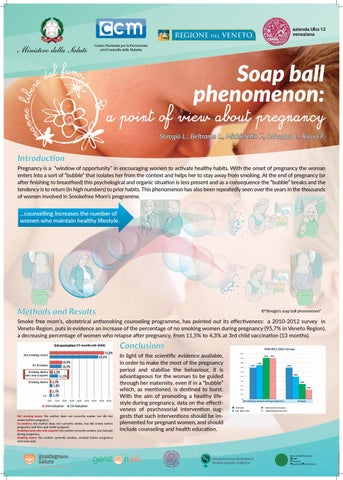 a point of view about pregnancy

Introducࢼon Pregnancy is a “window of opportunity” in encouraging women to ac vate healthy habits. With the onset of pregnancy the woman enters into a sort of “bubble” that isolates her from the context and helps her to stay away from smoking. At the end of pregnancy (or a er finishing to breas eed) this psychological and organic situa on is less present and as a consequence the “bubble” breaks and the tendency is to return (in high numbers) to prior habits. This phenomenon has also been repeatedly seen over the years in the thousands of women involved in Smokefree Mom’s programme.

...counselling increases the number of women who maintain healthy lifestyle.

Smoke free mom’s, obstetrical an smoking counseling programme, has pointed out its eﬀec veness: a 2010-2012 survey in Veneto Region, puts in evidence an increase of the percentage of no smoking women during pregnancy (95,7% in Veneto Region), a decreasing percentage of women who relapse a er pregnancy, from 11,5% to 4,3% at 3rd child vaccina on (13 months).

In light of the scien fic evidence available, in order to make the most of the pregnancy period and stabilise the behaviour, it is advantageous for the woman to be guided through her maternity, even if in a “bubble” which, as men oned, is des ned to burst. With the aim of promo ng a healthy lifestyle during pregnancy, data on the eﬀec veness of psychosocial interven on suggests that such interven ons should be implemented for pregnant women, and should include counseling and health educa on.

Soap ball phenomenon: a point of view about pregnancy