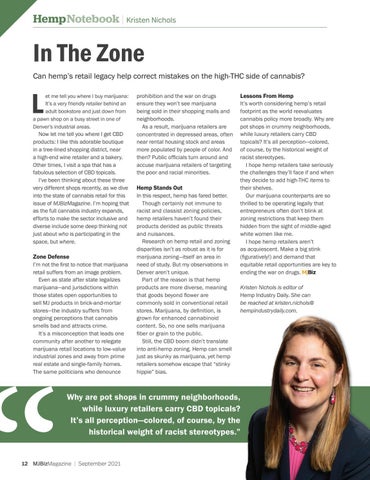 In The Zone Can hemp’s retail legacy help correct mistakes on the high-THC side of cannabis?

et me tell you where I buy marijuana: It’s a very friendly retailer behind an adult bookstore and just down from a pawn shop on a busy street in one of Denver’s industrial areas.

Now let me tell you where I get CBD products: I like this adorable boutique in a tree-lined shopping district, near a high-end wine retailer and a bakery. Other times, I visit a spa that has a fabulous selection of CBD topicals. I’ve been thinking about these three very different shops recently, as we dive into the state of cannabis retail for this issue of MJBizMagazine. I’m hoping that as the full cannabis industry expands, efforts to make the sector inclusive and diverse include some deep thinking not just about who is participating in the space, but where.

Zone Defense I’m not the first to notice that marijuana retail suffers from an image problem. Even as state after state legalizes marijuana—and jurisdictions within those states open opportunities to sell MJ products in brick-and-mortar stores—the industry suffers from ongoing perceptions that cannabis smells bad and attracts crime. It’s a misconception that leads one community after another to relegate marijuana retail locations to low-value industrial zones and away from prime real estate and single-family homes. The same politicians who denounce

prohibition and the war on drugs ensure they won’t see marijuana being sold in their shopping malls and neighborhoods. As a result, marijuana retailers are concentrated in depressed areas, often near rental housing stock and areas more populated by people of color. And then? Public officials turn around and accuse marijuana retailers of targeting the poor and racial minorities.

Hemp Stands Out In this respect, hemp has fared better. Though certainly not immune to racist and classist zoning policies, hemp retailers haven’t found their products derided as public threats and nuisances. Research on hemp retail and zoning disparities isn’t as robust as it is for marijuana zoning—itself an area in need of study. But my observations in Denver aren’t unique. Part of the reason is that hemp products are more diverse, meaning that goods beyond flower are commonly sold in conventional retail stores. Marijuana, by definition, is grown for enhanced cannabinoid content. So, no one sells marijuana fiber or grain to the public. Still, the CBD boom didn’t translate into anti-hemp zoning. Hemp can smell just as skunky as marijuana, yet hemp retailers somehow escape that “stinky hippie” bias.

Lessons From Hemp It’s worth considering hemp’s retail footprint as the world reevaluates cannabis policy more broadly. Why are pot shops in crummy neighborhoods, while luxury retailers carry CBD topicals? It’s all perception—colored, of course, by the historical weight of racist stereotypes. I hope hemp retailers take seriously the challenges they’ll face if and when they decide to add high-THC items to their shelves. Our marijuana counterparts are so thrilled to be operating legally that entrepreneurs often don’t blink at zoning restrictions that keep them hidden from the sight of middle-aged white women like me. I hope hemp retailers aren’t as acquiescent. Make a big stink (figuratively!) and demand that equitable retail opportunities are key to ending the war on drugs. Kristen Nichols is editor of Hemp Industry Daily. She can be reached at kristen.nichols@ hempindustrydaily.com.

Why are pot shops in crummy neighborhoods, while luxury retailers carry CBD topicals? It’s all perception—colored, of course, by the historical weight of racist stereotypes.” 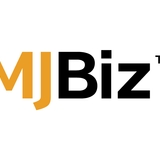