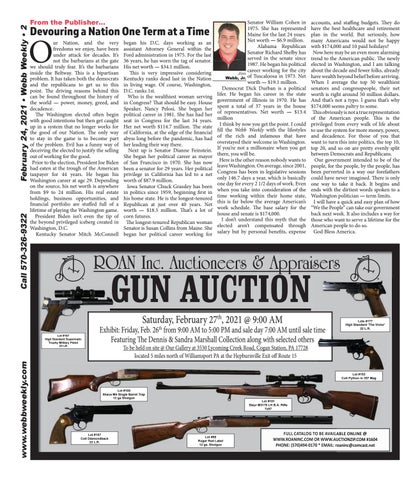 Devouring a Nation One Term at a Time

ur Nation, and the very freedoms we enjoy, have been under attack for decades. It’s not the barbarians at the gate we should truly fear. It’s the barbarians inside the Beltway. This is a bipartisan problem. It has taken both the democrats and the republicans to get us to this point. The driving reasons behind this can be found throughout the history of the world — power, money, greed, and decadence. The Washington elected often begin with good intentions but then get caught up in a system that no longer works for the good of our Nation. The only way to stay in the game is to become part of the problem. Evil has a funny way of deceiving the elected to justify the selling out of working for the good. Prior to the election, President Joe Biden had eaten at the trough of the American taxpayer for 44 years. He began his Washington career at age 29. Depending on the source, his net worth is anywhere from $9 to 24 million. His real estate holdings, business opportunities, and financial portfolio are stuffed full of a lifetime of playing the Washington game. President Biden isn’t even the tip of the beyond privileged iceberg created in Washington, D.C. Kentucky Senator Mitch McConnell

began his D.C. days working as an assistant Attorney General within the Ford administration in 1975. For the last 36 years, he has worn the tag of senator. His net worth — $34.1 million. This is very impressive considering Kentucky ranks dead last in the Nation in living wage. Of course, Washington, D.C. ranks 1st. Who is the wealthiest woman serving in Congress? That should be easy. House Speaker, Nancy Pelosi. She began her political career in 1981. She has had her seat in Congress for the last 34 years. Her net worth $114.7 million. The state of California, at the edge of the financial abyss long before the pandemic, has had her leading their way there. Next up is Senator Dianne Feinstein. She began her political career as mayor of San Francisco in 1970. She has now been a senator for 29 years. Her political privilege in California has led to a net worth of $87.9 million. Iowa Senator Chuck Grassley has been in politics since 1959, beginning first in his home state. He is the longest-tenured Republican at just over 40 years. Net worth — $18.5 million. That’s a lot of corn futures. The longest-tenured Republican woman Senator is Susan Collins from Maine. She began her political career working for

Senator William Cohen in 1975. She has represented Maine for the last 24 years. Net worth — $6.9 million. Alabama Republican Senator Richard Shelby has served in the senate since 1987. He began his political career working for the city Jim Webb, Jr. of Tuscaloosa in 1973. Net worth — $19.1 million. Democrat Dick Durban is a political lifer. He began his career in the state government of Illinois in 1970. He has spent a total of 37 years in the house of representatives. Net worth — $13.4 million I think by now you get the point. I could fill the Webb Weekly with the lifestyles of the rich and infamous that have overstayed their welcome in Washington. If you’re not a millionaire when you get there, you will be. Here is the other reason nobody wants to leave Washington. On average, since 2001, Congress has been in legislative sessions only 146.7 days a year, which is basically one day for every 2 1/2 days of work. Even when you take into consideration of the time working within their home state, this is far below the average American’s work schedule. The base salary for the house and senate is $174,000. I don’t understand this myth that the elected aren’t compensated through salary but by personal benefits, expense

accounts, and staffing budgets. They do have the best healthcare and retirement plan in the world. But seriously, how many Americans would not be happy with $174,000 and 10 paid holidays? Now here may be an even more alarming trend to the American public. The newly elected in Washington, and I am talking about the decade and fewer folks, already have wealth beyond belief before arriving. When I average the top 50 wealthiest senators and congresspeople, their net worth is right around 50 million dollars. And that’s not a typo. I guess that’s why $174,000 seems paltry to some. This obviously is not a true representation of the American people. This is the privileged from every walk of life about to use the system for more money, power, and decadence. For those of you that want to turn this into politics, the top 10, top 20, and so on are pretty evenly split between Democrats and Republicans. Our government intended to be of the people, for the people, by the people, has been perverted in a way our forefathers could have never imagined. There is only one way to take it back. It begins and ends with the dirtiest words spoken to a Washington politician — term limits. I will have a quick and easy plan of how “We the People” can take our government back next week. It also includes a way for those who want to serve a lifetime for the American people to do so. God Bless America.

Exhibit: Friday, Feb. 26th from 9:00 AM to 5:00 PM and sale day 7:00 AM until sale time Featuring The Dennis & Sandra Marshall Collection along with selected others

To be held on site @ Our Gallery at 3530 Lycoming Creek Road, Cogan Station, PA 17728 located 5 miles north of Williamsport PA at the Hepburnville Exit off Route 15 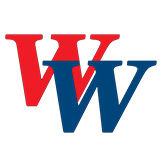