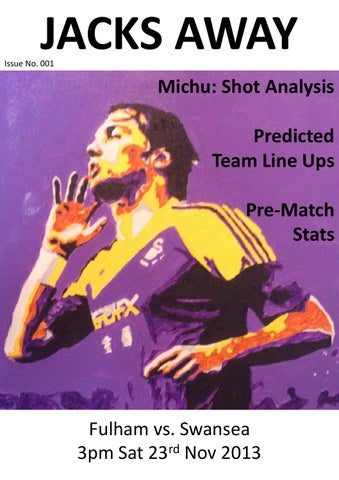 The aim of Jacks Away is to provide a single place for a number of Swans related articles as a kind of ‘away day’ programme This is the first edition, we’ll look at Michu’s shooting so far in the Premier League compared with last season, goals may be down but that’s largely down to chance quality. We also have Scott from ‘The Swansea Way’ with some pre-match stats and thoughts on possible line-ups We’ll also be looking at some numbers around the two teams and shot chalkboards from their last 3 league games

Michu’s shooting in the Premier League 3

You obviously can't choose which games you're going to score in (he's scored 4 in 7 games in the Europa league so nothing too wrong there) but with only 2 goals from 10 games so far in the Premier League means some people are questioning whether last season was a case of overperforming.

Here weâ&#x20AC;&#x2122;ll look in more detail at the type of opportunities Michu's had in the league so far this season compared with 2012/13 to show that it's more the type of chances that's impacted the goal return rather than any major drop off in form.

If you just looked at top level stats, they'd suggest a major drop off both in goals per 90 minutes played and shot conversion but no real drop off in shot volume. Taken at face value that would suggest a big change in performance.

Michu's only league goal from outside the box in either season came from his first shot as a Swansea player in the game against QPR thanks in part to a fumbling attempt at a save from Rob Green.

One way of trying to add a layer of context to any shot is Opta's Clear Cut Chance (CCC) which is defined as where there is a 'reasonable' expectation of a goal.

There's also the fact that it's only 10 league games so far this season (Michu missed the game vs. Stoke through injury) and one good game and all the stats are suddenly back on track.

Looking at where Michu scored last season there were a couple of 'purple patches', the start of the season with 4 goals in the first 3 games, and 7 in 7 games midway through the season. Also I'd argue that Bony's two goals vs. Stoke were exactly the type of goals Michu was scoring in the league last season.

Although the top level stats in the league may not be great, Michu is still a classy finisher but needs the opportunities which have generally been lacking across the team, so the next question is 'Where have the Clear Cut Chances gone?'

A mixture of Luck, Skill and the Fixture List can mean goals can come in random bursts

Fulham vs. Swansea Fulham fans will be hoping new head coach Rene Meulensteen can help Martin Jol pull their team away from the relegation zone, which they occupy due to Stoke having a superior (though that word feels generous) goal difference. Fulham have been very poor so far this season, and in front of their own fans they've struggled â&#x20AC;&#x201C; winning only one of five matches at Craven Cottage and are yet to register more than one goal in a home match. Couple that with the Swans stinginess away from home (four scored and four conceded in five games) and it would seem 0-0 would be a safe bet. Something has to give though. For me, there are too many good players on the field for it to end up as a bore draw, and with both sides (relatively) rested and looking to turn their form around - I can see this one being played at a frenetic pace.

The Swansea Way There are some interesting stats surrounding this match. Both sides are without a win in three games, with Swansea not having drawn an away fixture in their last five outings. Also, a stat came to light which showed eight of Swansea's twenty-three goals conceded this season have come in the last ten minutes. Hopefully that's not a trend which will continue for much longer. The stats do point to second half goals though, with 80% of all goals scored by the Swans coming in the second half. Fulham, on the other hand, have conceded the opening goal in 73% of their matches this season, and have conceded at least once in 80% of their home matches.

Fulham vs. Swansea I was told about something called "second game syndrome" which refers to new managers finding the winning touch in their second match in charge. I backed Sunderland to do just that after losing to the Swans in Poyet's first match in charge, and they did indeed go on to win their next game - whether the same effect can be instilled by a new head coach remains to be seen, but I'm all for it if it means Meulensteen sees his new club get off to a losing start at the expense of a Swansea win. I recently put together a couple of stats on Wilfried Bony which showed that the Swansea striker has received some harsh comments given his performance so far this season. Statistically, he's performing at a level which a) doesn't deserve the criticism he's received and b) stands up well when compared with more celebrated strikers.

The Swansea Way I firmly believe the Ivorian will come good, and I fancy him to grab a couple against an impoverished Fulham defence. He's got a goal every 133.25 minutes in the Premier League (and that drops to one every 118.1 in all competitions), while he's involved in a goal (assists being counted as well) every 106.4 minutes in the Premier League - the 17th best such statistic in the PL at the moment, and when you remove "anomalies" (players who've only played one or two games and as such have skewed averages) he rises to 13th. Not bad for a player who "doesn't run around enough". For me, control of the game is key and I feel that (while it's unlikely to change for now), Laudrup's insistence on selecting De Guzman in the centre is partly why we're not running games like we're used to.

Fulham vs. Swansea Morten Weighorst has been in the press this week saying he thinks we've been doing well and if you look at our passes/possession stats compared to last season, we're an improved outfit - but I'd beg to differ. We're performing ok, but I'm convinced there's a lot more that could come out of our current squad and we need to start dominating the centre of midfield again.

The Swansea Way The sooner Ca単as lines up alongside Britton, the better in my opinion. As for Fulham, I firmly expect a Swansea win but then I would wouldn't I? If I had to make a prediction, I'd go with a 2-0 Swansea win purely because we've scored four times as many goals in the second half as in the first half. If only football was that easy to predict...

Including the 2 own goals from Corners, Swansea have already scored same number of set-piece goals as 2012/13 season

Fulham have made fewer shots per game than any team in the league Half of all Fulham’s goals have come from Set Pieces, only Palace have a higher %

have 19.5 Fulham conceded most

23% Stats via Whoscored.com and EPL Index

shots per game in the league

Fulham:Last 3 Games 20 Shots to 1 in this one-sided affair

Fulham might have had more shots overall, but most activity coming after going 3 down after 22 min

Another pasting (own goal not shown)

Swans:Last 3 Games Swans with plenty of the ball but West Ham with chances on the counter attack

Game of very few chances with Cardiff scoring from a corner We Are Premier League

Jacks away issue 001 Fulham vs Swansea

Jacks away issue 001 Fulham vs Swansea