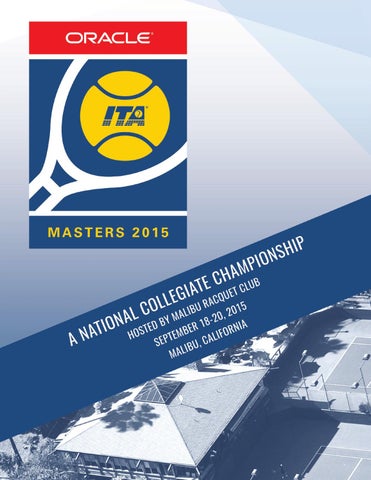 We Are The ITA

WELCOME TO THE 2015 ORACLE/ITA MASTERS

On behalf of Oracle, Iâ&#x20AC;&#x2122;d like to welcome you to the Oracle/ITA Masters here at Malibu Racquet Club. Oracle is delighted to host this inaugural event. We salute all of the participating athletes for their dedication to tennis and for their commitment to pursuing a college education. I would like to thank you for attending this event, which is the first national collegiate championship of the 2015 season. Thanks also goes to the ITA and event partner, Pepperdine University. We also want to welcome and thank The Tennis Channel, which will provide live television coverage of the men's and women's singles finals. Tennis fans know that Oracle, Larry Ellison and I are strong supporters of the game of tennis and weâ&#x20AC;&#x2122;re thrilled to be involved in this exciting new event. Thank you for coming and please enjoy the weekend. Sincerely,

A MESSAGE FROM THE ITA PEPPERDINE, MALIBU RACQUET CLUB WELCOMES THE 2015 ORACLE/ITA MASTERS The Intercollegiate Tennis Association (ITA) is delighted to have the inaugural Oracle/ITA Masters hosted by the Malibu Racquet Club, with Pepperdine University serving as an official event partner. The ITA would like to thank Oracle CEO Mark Hurd and the entire Oracle staff for its partnership role with the ITA and its generous and dynamic support of collegiate tennis. In addition, the ITA would like to acknowledge Trey Waltke, General Manager of Malibu Racquet Club and his staff, as well as Roger Horne, Pepperdine University Assistant Athletic Director for Communications, and the Pepperdine staff, for all of their hard work in helping make this event a reality. The 2015 Oracle/ITA Masters is the first ITA national championship of the 2015-16 season, and features many of the nation’s top collegiate singles and doubles players. We’re thrilled also announce to announce that thanks to the efforts of Steve Webster, President and CEO of CMPR, the Tennis Channel will broadcast the men’s and women’s singles championship matches live on its network on Sunday, in what will be an exemplary display of the ever-expanding reach of college tennis. In addition to sponsoring this prestigious event, Oracle is the official sponsor of the ITA national rankings. The 2015-16 Oracle/ITA College Tennis Rankings preseason national singles and doubles rankings for Division I were released this week at http://www.itatennis.com/AwardsAndRankings/Rankings.htm. As the governing body of collegiate tennis, the ITA oversees nine National Championships. In addition, the ITA administers the Oracle/ITA College Tennis Rankings at the NCAA Divisions I, II and III, NAIA and Junior College levels. The ITA also has a comprehensive awards program for players and coaches to honor on-and-off court achievements. When you are not on site at the Malibu Racquet Club this week, be sure to follow live scores from the event at www.ITAtennis.com and receive real-time updates on the ITA’s Facebook and Twitter pages. Best wishes to the student-athlete participants and their coaches on the start to another great season of college tennis.

David A Benjamin ITA Chairman of the Board

ITA CEO TIMOTHY RUSSELL WELCOMES THE STUDENT-ATHLETES TO THE 2015 ORACLE/ITA MASTERS Dear Student-Athletes: Welcome to the 2015 Oracle/ITA Masters. College tennis is a forward-thinking leader in the world of intercollegiate athletics, a fast-paced sport that prepares student-athletes for a fast-paced world. The ITA is proud to be partnering with Oracle, one of the world’s most innovative companies and gracious corporate citizens. The ITA is most grateful to the leaders at Oracle for their shared vision of and belief in the power of higher education and the role of college tennis in providing educational opportunities for personal and leadership development through the sport of a lifetime. College tennis continues to be the connective tissue for our sport, the aspirational goal for junior tennis players worldwide and one viable high performance pathway to a career as a top professional tennis player. You represent the best of college tennis. Congratulations on everything that you have accomplished to this point in your life. We applaud your hard work, self-discipline, leadership, and sportsmanship. Your passion for our sport and for your schools are both admirable. You embody grit, which has recently been defined by leading psychologists as “passion and perseverance in pursuit of long-term goals,” perhaps the primary driver of success. Good luck and best wishes . . . this weekend, throughout the coming school year, and as your lives and careers unfold. Enjoy your time in Malibu – the competition and the comradery. Thank you for participation in this magnificent inaugural championship, and thanks to Oracle! Please share your words of gratitude with our hosts at the Malibu Racquet Club, event partner Pepperdine University and with our friends from Oracle as you see them.

save you time and money on your travel

Group benefits for as few as six passengers on a particular itinerary Free name changes for group travel Waiver of airline fee for changes on return flights during tournament play Payment for group airline tickets days before departure, which greatly reduces the amount of unused airline tickets • Waiver of advance purchase fare requirements for groups

2015 ORACLE/ITA OUTING & AWARDS LUNCHEON FOREST HILLS, NY – With sunny skies and comfortable temperatures, the West Side Tennis Club in Forest Hills, New York, proved to be the perfect backdrop on Aug. 28, for Oracle and the Intercollegiate Tennis Association to celebrate the accomplishments of 2014-15’s top collegiate tennis players at the 2015 Oracle/ITA Outing and Awards Luncheon. USTA Eastern participated as an event partner. The 2015 ITA Collegiate All-Star Teams were recognized in an awards ceremony on Friday, as well as the ITA/Arthur Ashe Jr. National Leadership and Sportsmanship Award winners. “The best of college tennis combines excellence on the court, in the classroom, and in life. The Oracle/ITA Outing and Awards Luncheon represents the best of the best in our sport,” said ITA CEO Timothy Russell. “The achievements of these amazing student- athletes bode well for the future of our country and the world. Congratulations to each and all of these remarkable young people. The ITA applauds all of their accomplishments and wishes them well in their life journeys.” ITA Chairman of the Board, David Benjamin, joined Russell in presenting the ITA All-Star awards and recognizing the players’ accomplishments. Former New York City Mayor David Dinkins delivered a great speech on the meaning of the ITA/Arthur Ashe Jr. Leadership and Sportsmanship Award, in addition to presenting the award to the student-athletes. “I’ve never been part an event like this, so it was really nice to be with other people who have accomplished something big throughout the last season,” said Baylor’s Julian Lenz, who garnered an All-Star award with doubles teammate from last season, Diego Galeano. “Being in New York and at this (tennis) club, there’s a lot of history here.” Prior to the awards luncheon the student-athletes took to the West Side Tennis Club’s grass courts for some friendly competition, paired with members of USTA Eastern, the ITA staff and other invited guests. “We don’t get the opportunity to play on grass courts often,” said Virginia’s Julia Elbaba, a 2015 ITA Collegiate All-Star honoree. “I had a lot of fun and it was a great experience.” Inaugurated in 1984, the ITA All-Star Team honors the nation’s top-ranked men’s and women’s players from the year-end Oracle/ITA Collegiate Tennis Rankings and spans the five competitive divisions: NCAA Divisions I, II and III, NAIA and Junior & Community Colleges. Winners of the 2014 USTA/ITA National Indoor Intercollegiate Championships and 2015 NCAA Division I Championships are also recognized. The ITA/Arthur Ashe Leadership and Sportsmanship Award recognizes outstanding individuals in all divisions at the regional and national level. This award which dates back to 1982, goes to NCAA Divisions I, II and III, NAIA and JUCO men’s and women’s players who have exhibited outstanding sportsmanship and leadership as well as scholastic, extracurricular and tennis achievements. You can view the 2015 ITA Collegiate All-Star Team and the ITA/Arthur Ashe, Jr. Leadership and Sportsmanship Award winners at www.itatennis.com.

More Enterprise SaaS Applications Than Any Other Cloud Services Provider