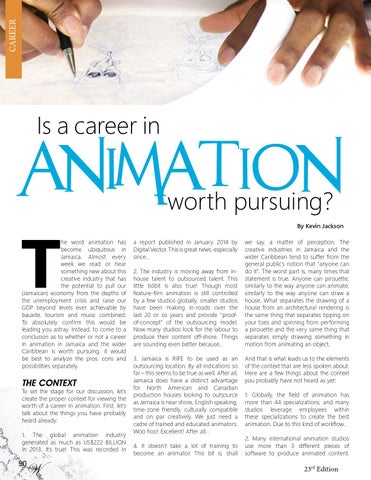 Is a career in

he word animation has become ubiquitous in Jamaica. Almost every week we read or hear something new about this creative industry that has the potential to pull our (Jamaican) economy from the depths of the unemployment crisis and raise our GDP beyond levels ever achievable by bauxite, tourism and music combined. To absolutely confirm this would be leading you astray. Instead, to come to a conclusion as to whether or not a career in animation in Jamaica and the wider Caribbean is worth pursuing, it would be best to analyze the pros, cons and possibilities separately.

To set the stage for our discussion, let’s create the proper context for viewing the worth of a career in animation. First, let’s talk about the things you have probably heard already: 1. The global animation industry generated as much as US$222 BILLION In 2013. It’s true! This was recorded in

By Kevin Jackson a report published in January 2014 by Digital Vector. This is great news, especially since… 2. The industry is moving away from inhouse talent to outsourced talent. This little tidbit is also true! Though most feature-film animation is still controlled by a few studios globally, smaller studios have been making in-roads over the last 20 or so years and provide “proofof-concept” of the outsourcing model. Now many studios look for the labour to produce their content off-shore. Things are sounding even better because… 3. Jamaica is RIPE to be used as an outsourcing location. By all indications so far – this seems to be true as well. After all, Jamaica does have a distinct advantage for North American and Canadian production houses looking to outsource as Jamaica is near shore, English speaking, time-zone friendly, culturally compatible and on par creatively. We just need a cadre of trained and educated animators. Woo hoo! Excellent! After all… 4. It doesn’t take a lot of training to become an animator. This bit is, shall

we say, a matter of perception. The creative industries in Jamaica and the wider Caribbean tend to suffer from the general public’s notion that “anyone can do it”. The worst part is, many times that statement is true. Anyone can pirouette, similarly to the way anyone can animate, similarly to the way anyone can draw a house. What separates the drawing of a house from an architectural rendering is the same thing that separates tipping on your toes and spinning from performing a pirouette and the very same thing that separates simply drawing something in motion from animating an object. And that is what leads us to the elements of the context that are less spoken about. Here are a few things about the context you probably have not heard as yet: 1. Globally, the field of animation has more than 44 specializations, and many studios leverage employees within these specializations to create the best animation. Due to this kind of workflow… 2. Many international animation studios use more than 3 different pieces of software to produce animated content. 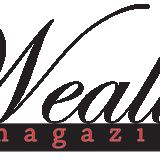