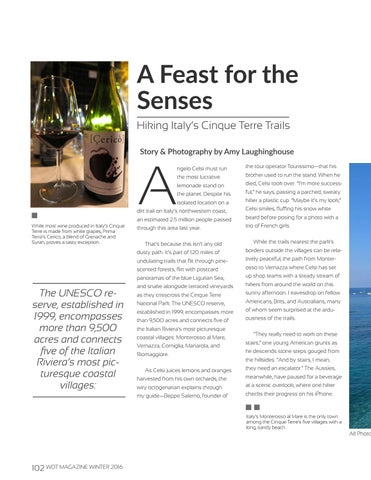 While most wine produced in Italy’s Cinque Terre is made from white grapes, Prima Terra’s Cerico, a blend of Grenache and Syrah, proves a tasty exception.

The UNESCO reserve, established in 1999, encompasses more than 9,500 acres and connects five of the Italian Riviera’s most picturesque coastal villages:

the tour operator Tourissimo—that his

brother used to run the stand. When he

the planet. Despite his

isolated location on a

beard before posing for a photo with a

through this area last year.

That’s because this isn’t any old

While the trails nearest the park’s

borders outside the villages can be rela-

undulating trails that flit through pine-

tively peaceful, the path from Monter-

osso to Vernazza where Celsi has set

panoramas of the blue Ligurian Sea,

up shop teams with a steady stream of

and snake alongside terraced vineyards

hikers from around the world on this

as they crisscross the Cinque Terre

sunny afternoon. I eavesdrop on fellow

Americans, Brits, and Australians, many

of whom seem surprised at the ardu-

than 9,500 acres and connects five of

“They really need to work on these stairs,” one young American grunts as he descends stone steps gouged from the hillsides. “And by stairs, I mean, they need an escalator.” The Aussies,

harvested from his own orchards, the

meanwhile, have paused for a beverage

at a scenic overlook, where one hiker

my guide—Beppe Salerno, founder of

checks their progress on his iPhone.

Italy’s Monterosso al Mare is the only town among the Cinque Terre’s five villages with a long, sandy beach.