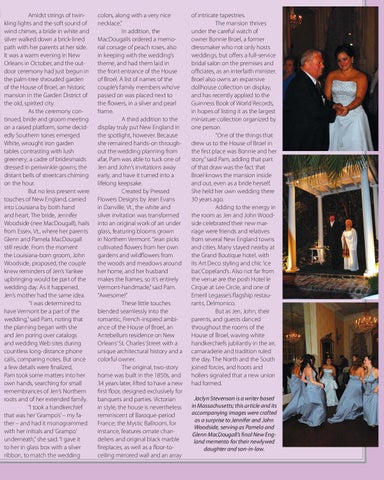 Amidst strings of twinkling lights and the soft sound of wind chimes, a bride in white and silver walked down a brick-lined path with her parents at her side. It was a warm evening in New Orleans in October, and the outdoor ceremony had just begun in the palm-tree shrouded garden of the House of Broel, an historic mansion in the Garden District of the old, spirited city. As the ceremony continued, bride and groom meeting on a raised platform, some decidedly Southern tones emerged. White, wrought iron garden tables contrasting with lush greenery; a cadre of bridesmaids dressed in periwinkle gowns; the distant bells of streetcars chiming on the hour. But no less present were touches of New England, carried into Louisiana by both hand and heart. The bride, Jennifer Woodside (nee MacDougall), hails from Essex, Vt., where her parents Glenn and Pamela MacDougall still reside. From the moment the Louisiana-born groom, John Woodside, proposed, the couple knew reminders of Jen’s Yankee upbringing would be part of the wedding day. As it happened, Jen’s mother had the same idea. “I was determined to have Vermont be a part of the wedding,” said Pam, noting that the planning began with she and Jen poring over catalogs and wedding Web sites during countless long-distance phone calls, comparing notes. But once a few details were finalized, Pam took some matters into her own hands, searching for small remembrances of Jen’s Northern roots and of her extended family. “I took a handkerchief that was her ‘Grampo’s’ – my father – and had it monogrammed with her initials and ‘Grampo’ underneath,” she said. “I gave it to her in glass box with a silver ribbon, to match the wedding

colors, along with a very nice necklace.” In addition, the MacDougalls ordered a memorial corsage of peach roses, also in keeping with the wedding’s theme, and had them laid in the front entrance of the House of Broel. A list of names of the couple’s family members who’ve passed on was placed next to the flowers, in a silver and pearl frame. A third addition to the display truly put New England in the spotlight, however. Because she remained hands-on throughout the wedding planning from afar, Pam was able to tuck one of Jen and John’s invitations away early, and have it turned into a lifelong keepsake. Created by Pressed Flowers Designs by Jean Evans in Danville, Vt., the white and silver invitation was transformed into an original work of art under glass, featuring blooms grown in Northern Vermont. “Jean picks cultivated flowers from her own gardens and wildflowers from the woods and meadows around her home, and her husband makes the frames, so it’s entirely Vermont-handmade,” said Pam. “Awesome!” These little touches blended seamlessly into the romantic, French-inspired ambiance of the House of Broel, an Antebellum residence on New Orleans’ St. Charles Street with a unique architectural history and a colorful owner. The original, two-story home was built in the 1850s, and 34 years later, lifted to have a new first floor, designed exclusively for banquets and parties. Victorian in style, the house is nevertheless reminiscent of Baroque-period France; the Mystic Ballroom, for instance, features ornate chandeliers and original black marble fireplaces, as well as a floor-toceiling mirrored wall and an array

of intricate tapestries. The mansion thrives under the careful watch of owner Bonnie Broel, a former dressmaker who not only hosts weddings, but offers a full-service bridal salon on the premises and officiates, as an interfaith minister. Broel also owns an expansive dollhouse collection on display, and has recently applied to the Guinness Book of World Records, in hopes of listing it as the largest miniature collection organized by one person. “One of the things that drew us to the House of Broel in the first place was Bonnie and her story,” said Pam, adding that part of that draw was the fact that Broel knows the mansion inside and out, even as a bride herself. She held her own wedding there 30 years ago. Adding to the energy in the room as Jen and John Woodside celebrated their new marriage were friends and relatives from several New England towns and cities. Many stayed nearby at the Grand Boutique hotel, with its Art Deco styling and chic ‘ice bar,’ Copeland’s. Also not far from the venue are the posh Hotel le Cirque at Lee Circle, and one of Emeril Legasse’s flagship restaurants, Delmonico. But as Jen, John, their parents, and guests danced throughout the rooms of the House of Broel, waving white handkerchiefs jubilantly in the air, camaraderie and tradition ruled the day. The North and the South joined forces, and hoots and hollers signaled that a new union had formed. Jaclyn Stevenson is a writer based in Massachusetts; this article and its accompanying images were crafted as a surprise to Jennifer and John Woodside, serving as Pamela and Glenn MacDougall’s final New England memento for their newlywed daughter and son-in-law. 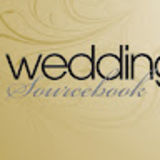