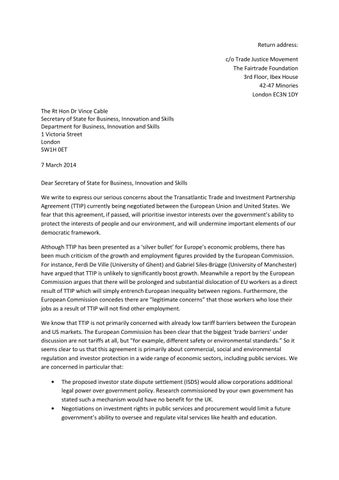 Return address: c/o Trade Justice Movement The Fairtrade Foundation 3rd Floor, Ibex House 42-47 Minories London EC3N 1DY The Rt Hon Dr Vince Cable Secretary of State for Business, Innovation and Skills Department for Business, Innovation and Skills 1 Victoria Street London SW1H 0ET 7 March 2014 Dear Secretary of State for Business, Innovation and Skills We write to express our serious concerns about the Transatlantic Trade and Investment Partnership Agreement (TTIP) currently being negotiated between the European Union and United States. We fear that this agreement, if passed, will prioritise investor interests over the government’s ability to protect the interests of people and our environment, and will undermine important elements of our democratic framework. Although TTIP has been presented as a ‘silver bullet’ for Europe’s economic problems, there has been much criticism of the growth and employment figures provided by the European Commission. For instance, Ferdi De Ville (University of Ghent) and Gabriel Siles-Brügge (University of Manchester) have argued that TTIP is unlikely to significantly boost growth. Meanwhile a report by the European Commission argues that there will be prolonged and substantial dislocation of EU workers as a direct result of TTIP which will simply entrench European inequality between regions. Furthermore, the European Commission concedes there are “legitimate concerns” that those workers who lose their jobs as a result of TTIP will not find other employment. We know that TTIP is not primarily concerned with already low tariff barriers between the European and US markets. The European Commission has been clear that the biggest ‘trade barriers’ under discussion are not tariffs at all, but “for example, different safety or environmental standards.” So it seems clear to us that this agreement is primarily about commercial, social and environmental regulation and investor protection in a wide range of economic sectors, including public services. We are concerned in particular that: 

The proposed investor state dispute settlement (ISDS) would allow corporations additional legal power over government policy. Research commissioned by your own government has stated such a mechanism would have no benefit for the UK. Negotiations on investment rights in public services and procurement would limit a future government’s ability to oversee and regulate vital services like health and education.

Harmonisation talks – the very centre of the negotiation – are being used to lower standards on a range of areas from environmental protection to health and safety. This has been pushed by corporate lobbyists. For instance, the European Services representative told a meeting on EU investment policy in 2011: “Industry will oppose any deal in which investment protection is traded off against public policy objectives, including human and labour rights.”

Trade unions, NGOs, faith groups and consumer protection watchdogs are expressing their concern about TTIP across Europe and the United States. We are witnessing growing opposition to an agreement being signed. Without evidence to support the benefits of TTIP for workers, citizens and consumers in the UK, and with considerable concerns about the detrimental social and environmental impact of TTIP, we are calling for a halt to TTIP negotiations. While negotiations are on-going, we call on you to take immediate actions within the UK’s competency: -

organise a public consultation on the full TTIP treaty; insist that the precautionary principle is upheld; ensure that health, education, water, sanitation and other public services are protected from further liberalisation; and commit DFID to undertaking a comprehensive analysis of the impact of the deal on the multilateral system and on developing countries. 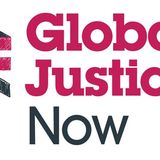 Open letter to Vince Cable about TTIP. Signed by WDM and other UK organisations and unions

Open letter to Vince Cable about TTIP. Signed by WDM and other UK organisations and unions