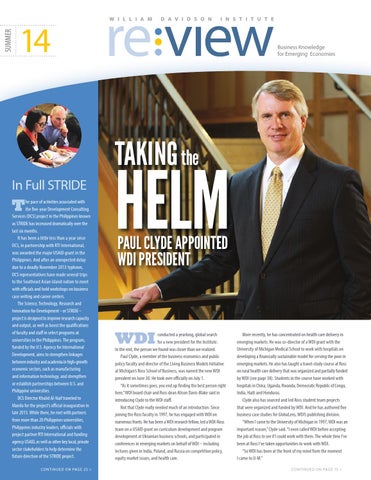 TAKING the In Full STRIDE

he pace of activities associated with the five-year Development Consulting Services (DCS) project in the Philippines known as STRIDE has increased dramatically over the last six months. It has been a little less than a year since DCS, in partnership with RTI International, was awarded the major USAID grant in the Philippines. And after an unexpected delay due to a deadly November 2013 typhoon, DCS representatives have made several trips to the Southeast Asian island nation to meet with officials and hold workshops on business case writing and career centers. The Science, Technology, Research and Innovation for Development – or STRIDE – project is designed to improve research capacity and output, as well as boost the qualifications of faculty and staff in select programs at universities in the Philippines. The program, funded by the U.S. Agency for International Development, aims to strengthen linkages between industry and academia in high-growth economic sectors, such as manufacturing and information technology, and strengthen or establish partnerships between U.S. and Philippine universities. DCS Director Khalid Al-Naif traveled to Manila for the project’s official inauguration in late 2013. While there, he met with partners from more than 20 Philippines universities, Philippines industry leaders, officials with project partner RTI International and funding agency USAID, as well as other key local, private sector stakeholders to help determine the future direction of the STRIDE project. CON T INUED O N PAGE 25 >

conducted a yearlong, global search for a new president for the Institute. In the end, the person we found was closer than we realized. Paul Clyde, a member of the business economics and public policy faculty and director of the Living Business Models Initiative at Michigan’s Ross School of Business, was named the new WDI president on June 30. He took over officially on July 1. “As it sometimes goes, you end up finding the best person right here,” WDI board chair and Ross dean Alison Davis-Blake said in introducing Clyde to the WDI staff. Not that Clyde really needed much of an introduction. Since joining the Ross faculty in 1997, he has engaged with WDI on numerous fronts. He has been a WDI research fellow, led a WDI-Ross team on a USAID grant on curriculum development and program development at Ukrainian business schools, and participated in conferences in emerging markets on behalf of WDI – including lectures given in India, Poland, and Russia on competition policy, equity market issues, and health care.

More recently, he has concentrated on health care delivery in emerging markets. He was co-director of a WDI grant with the University of Michigan Medical School to work with hospitals on developing a financially sustainable model for serving the poor in emerging markets. He also has taught a travel-study course at Ross on rural health care delivery that was organized and partially funded by WDI (see page 38). Students in the course have worked with hospitals in China, Uganda, Rwanda, Democratic Republic of Congo, India, Haiti and Honduras. Clyde also has sourced and led Ross student team projects that were organized and funded by WDI. And he has authored five business case studies for GlobaLens, WDI’s publishing division. “When I came to the University of Michigan in 1997, WDI was an important reason,” Clyde said. “I even called WDI before accepting the job at Ross to see if I could work with them. The whole time I’ve been at Ross I’ve taken opportunities to work with WDI. “So WDI has been at the front of my mind from the moment I came to U-M.” CON T INUED O N PAGE 15 > 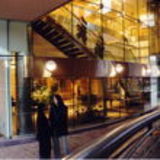 The Davidson Review chronicles the past events and future activities of the William Davidson Institute at the University of Michigan.

The Davidson Review chronicles the past events and future activities of the William Davidson Institute at the University of Michigan.