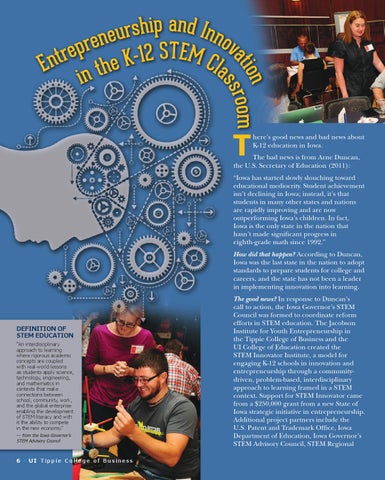 The bad news is from Arne Duncan, the U.S. Secretary of Education (2011): “Iowa has started slowly slouching toward educational mediocrity. Student achievement isn’t declining in Iowa; instead, it’s that students in many other states and nations are rapidly improving and are now outperforming Iowa’s children. In fact, Iowa is the only state in the nation that hasn’t made significant progress in eighth-grade math since 1992.” How did that happen? According to Duncan, Iowa was the last state in the nation to adopt standards to prepare students for college and careers, and the state has not been a leader in implementing innovation into learning.

DEFINITION OF STEM EDUCATION “An interdisciplinary approach to learning where rigorous academic concepts are coupled with real-world lessons as students apply science, technology, engineering, and mathematics in contexts that make connections between school, community, work, and the global enterprise enabling the development of STEM literacy and with it the ability to compete in the new economy.” — from the Iowa Governor’s STEM Advisory Council

6 b UI Tippie College of Business

The good news? In response to Duncan’s call to action, the Iowa Governor’s STEM Council was formed to coordinate reform efforts in STEM education. The Jacobson Institute for Youth Entrepreneurship in the Tippie College of Business and the UI College of Education created the STEM Innovator Institute, a model for engaging K-12 schools in innovation and entrepreneurship through a communitydriven, problem-based, interdisciplinary approach to learning framed in a STEM context. Support for STEM Innovator came from a $250,000 grant from a new State of Iowa strategic initiative in entrepreneurship. Additional project partners include the U.S. Patent and Trademark Office, Iowa Department of Education, Iowa Governor’s STEM Advisory Council, STEM Regional 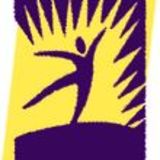 The University of Iowa Henry B. Tippie College of Business Tippie Magazine

Alumni magazine for The University of Iowa Henry B. Tippie College of Business Winter 2014-15 Issue

The University of Iowa Henry B. Tippie College of Business Tippie Magazine

Alumni magazine for The University of Iowa Henry B. Tippie College of Business Winter 2014-15 Issue