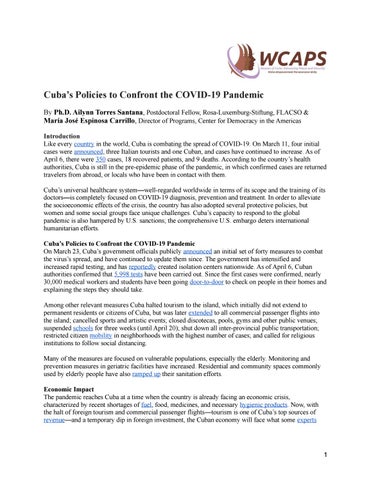 Cuba’s Policies to Confront the COVID-19 Pandemic By Ph.D. Ailynn Torres Santana, Postdoctoral Fellow, Rosa-Luxemburg-Stiftung, FLACSO & María José Espinosa Carrillo, Director of Programs, Center for Democracy in the Americas Introduction Like every country in the world, Cuba is combating the spread of COVID-19. On March 11, four initial cases were announced, three Italian tourists and one Cuban, and cases have continued to increase. As of April 6, there were 350 cases, 18 recovered patients, and 9 deaths. According to the country’s health authorities, Cuba is still in the pre-epidemic phase of the pandemic, in which confirmed cases are returned travelers from abroad, or locals who have been in contact with them. Cuba’s universal healthcare system—well-regarded worldwide in terms of its scope and the training of its doctors—is completely focused on COVID-19 diagnosis, prevention and treatment. In order to alleviate the socioeconomic effects of the crisis, the country has also adopted several protective policies, but women and some social groups face unique challenges. Cuba’s capacity to respond to the global pandemic is also hampered by U.S. sanctions; the comprehensive U.S. embargo deters international humanitarian efforts. Cuba’s Policies to Confront the COVID-19 Pandemic On March 23, Cuba’s government officials publicly announced an initial set of forty measures to combat the virus’s spread, and have continued to update them since. The government has intensified and increased rapid testing, and has reportedly created isolation centers nationwide. As of April 6, Cuban authorities confirmed that 5,998 tests have been carried out. Since the first cases were confirmed, nearly 30,000 medical workers and students have been going door-to-door to check on people in their homes and explaining the steps they should take. Among other relevant measures Cuba halted tourism to the island, which initially did not extend to permanent residents or citizens of Cuba, but was later extended to all commercial passenger flights into the island; cancelled sports and artistic events; closed discotecas, pools, gyms and other public venues; suspended schools for three weeks (until April 20); shut down all inter-provincial public transportation; restricted citizen mobility in neighborhoods with the highest number of cases; and called for religious institutions to follow social distancing. Many of the measures are focused on vulnerable populations, especially the elderly. Monitoring and prevention measures in geriatric facilities have increased. Residential and community spaces commonly used by elderly people have also ramped up their sanitation efforts. Economic Impact The pandemic reaches Cuba at a time when the country is already facing an economic crisis, characterized by recent shortages of fuel, food, medicines, and necessary hygienic products. Now, with the halt of foreign tourism and commercial passenger flights—tourism is one of Cuba’s top sources of revenue—and a temporary dip in foreign investment, the Cuban economy will face what some experts 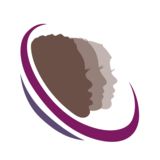 This WCAPS article highlights challenged Cuba is facing and addressing the COVID-19 pandemic.

This WCAPS article highlights challenged Cuba is facing and addressing the COVID-19 pandemic.