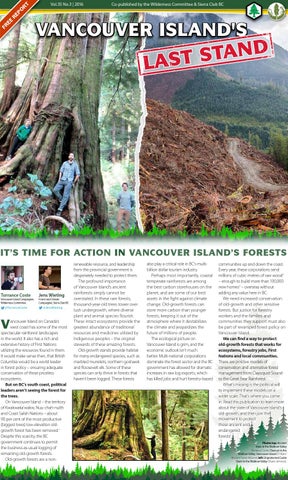 Co-published by the Wilderness Committee &amp; Sierra Club BC

ancouver Island on Canada’s west coast has some of the most spectacular rainforest landscapes in the world. It also has a rich and extensive history of First Nations utilizing the resources found in them. It would make sense then, that British Columbia would be a world leader in forest policy – ensuring adequate conservation of these priceless ecosystems. But on BC&#39;s south coast, political leaders aren’t seeing the forest for the trees. On Vancouver Island – the territory of Kwakwaka’wakw, Nuu-chah-nulth and Coast Salish Nations – about 90 per cent of the most productive (biggest trees) low-elevation oldgrowth forest has been removed.1 Despite this scarcity, the BC government continues to permit the business-as-usual logging of remaining old-growth forests. Old-growth forests are a non-

renewable resource, and leadership from the provincial government is desperately needed to protect them. The profound importance of Vancouver Island’s ancient rainforests simply cannot be overstated. In these rare forests, thousand-year-old trees tower over lush undergrowth, where diverse plant and animal species flourish. These intact ecosystems provide the greatest abundance of traditional resources and medicines utilized by Indigenous peoples – the original stewards of these amazing forests. Old-growth stands provide habitat for many endangered species, such as marbled murrelets, northern goshawk and Roosevelt elk. Some of these species can only thrive in forests that haven’t been logged. These forests

also play a critical role in BC’s multibillion dollar tourism industry. Perhaps most importantly, coastal temperate rainforests are among the best carbon storehouses on the planet, and are some of our best assets in the fight against climate change. Old-growth forests can store more carbon than younger forests, keeping it out of the atmosphere where it destabilizes the climate and jeopardizes the future of millions of people. The ecological picture on Vancouver Island is grim, and the economic outlook isn’t much better. Multi-national corporations dominate the forest sector and the BC government has allowed for dramatic increases in raw log exports, which has killed jobs and hurt forestry-based

communities up and down the coast. Every year, these corporations send millions of cubic metres of raw wood2 – enough to build more than 100,000 new homes3 – overseas without adding any value here in BC. We need increased conservation of old-growth and other sensitive forests. But justice for forestry workers and the families and communities they support must also be part of revamped forest policy on Vancouver Island. We can find a way to protect old-growth forests that works for ecosystems, forestry jobs, First Nations and local communities. There are positive models of conservation and alternative forest management from Clayoquot Sound to the Great Bear Rainforest. What’s missing is the political will to implement these models on a wider scale. That’s where you come in. Read this publication to learn more about the state of Vancouver Island’s old-growth, and then join the movement to protect these ancient and endangered forests! Photos top: Ancient trees in the Walbran Valley (Torrance Coste), Clearcut in the Walbran Valley, Vancouver Island (TJ Watt/ Ancient Forest Alliance), left: Unprotected Castle Giant in the Walbran Valley (Shane Johnson).

The Wilderness Committee's latest educational report, co-produced with our friends at Sierra Club BC, highlights the crisis in Vancouver Island’s forests and advocates for better management of these incredible ecosystems. Decades of overharvest and continued old-growth logging, combined with job-killing raw log exports, have pushed many Vancouver Island ecosystems – and forestry-dependent communities – to the brink." The report makes recommendations on how to shift course to save the Island's forests and emphasizes the need for the BC government to come to the table and address these issues, moving towards a truly sustainable forest economy. 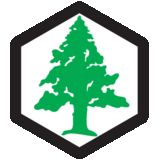