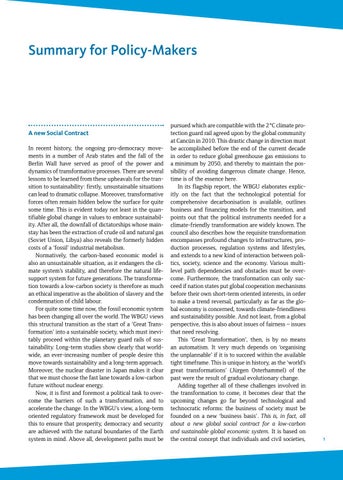 A new Social Contract In recent history, the ongoing pro-democracy move­ ments in a number of Arab states and the fall of the Berlin Wall have served as proof of the power and dynamics of transformative processes. There are several lessons to be learned from these upheavals for the tran­ sition to sustainability: firstly, unsustainable situations can lead to dramatic collapse. Moreover, transformative forces often remain hidden below the surface for quite some time. This is evident today not least in the quan­ tifiable global change in values to embrace sustainabil­ ity. After all, the downfall of dictatorships whose main­ stay has been the extraction of crude oil and natural gas (Soviet Union, Libya) also reveals the formerly hidden costs of a ‘fossil’ industrial metabolism. Normatively, the carbon-based economic model is also an unsustainable situation, as it endangers the cli­ mate system’s stability, and therefore the natural lifesupport system for future generations. The transforma­ tion towards a low-carbon society is therefore as much an ethical imperative as the abolition of slavery and the condemnation of child labour. For quite some time now, the fossil economic system has been changing all over the world. The WBGU views this structural transition as the start of a ‘Great Trans­ formation’ into a sustainable society, which must inevi­ tably proceed within the planetary guard rails of sus­ tainability. Long-term studies show clearly that world­ wide, an ever-increasing number of people desire this move towards sustainability and a long-term approach. Moreover, the nuclear disaster in Japan makes it clear that we must choose the fast lane towards a low-carbon future without nuclear energy. Now, it is first and foremost a political task to over­ come the barriers of such a transformation, and to accelerate the change. In the WBGU’s view, a long-term oriented regulatory framework must be developed for this to ensure that prosperity, democracy and security are achieved with the natural boundaries of the Earth system in mind. Above all, development paths must be

pursued which are compatible with the 2  °C climate pro­ tection guard rail agreed upon by the global community at Cancún in 2010. This drastic change in direction must be accomplished before the end of the current decade in order to reduce global greenhouse gas emissions to a minimum by 2050, and thereby to maintain the pos­ sibility of avoiding dangerous climate change. Hence, time is of the essence here. In its flagship report, the WBGU elaborates explic­ itly on the fact that the technological potential for comprehensive decarbonisation is available, outlines business and financing models for the transition, and points out that the political instruments needed for a climate-friendly transformation are widely known. The council also describes how the requisite transformation encompasses profound changes to infrastructures, pro­ duction processes, regulation systems and lifestyles, and extends to a new kind of interaction between poli­ tics, society, science and the economy. Various multilevel path dependencies and obstacles must be over­ come. Furthermore, the transformation can only suc­ ceed if nation states put global cooperation mechanisms before their own short-term oriented interests, in order to make a trend reversal, particularly as far as the glo­ bal economy is concerned, towards climate-friendliness and sustainability possible. And not least, from a global perspective, this is also about issues of fairness – issues that need resolving. This ‘Great Transformation’, then, is by no means an automatism. It very much depends on ‘organising the unplannable’ if it is to succeed within the available tight timeframe. This is unique in history, as the ‘world’s great transformations’ (Jürgen Osterhammel) of the past were the result of gradual evolutionary change. Adding together all of these challenges involved in the transformation to come, it becomes clear that the upcoming changes go far beyond technological and technocratic reforms: the business of society must be founded on a new ‘business basis’. This is, in fact, all about a new global social contract for a low-carbon and sustainable global economic system. It is based on the central concept that individuals and civil societies,