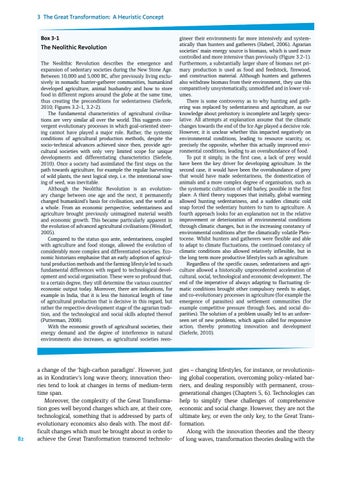 The Neolithic Revolution The Neolithic Revolution describes the emergence and expansion of sedentary societies during the New Stone Age. Between 10,000 and 5,000 BC, after previously living exclu­ sively in nomadic hunter-gatherer communities, humankind developed agriculture, animal husbandry and how to store food in different regions around the globe at the same time, thus creating the preconditions for sedentariness (Sieferle, 2010; Figures 3.2-1, 3.2-2). The fundamental characteristics of agricultural civilisa­ tions are very similar all over the world. This suggests con­ vergent evolutionary processes in which goal-oriented steer­ ing cannot have played a major role. Rather, the systemic conditions of agricultural production methods, despite the socio-technical advances achieved since then, provide agri­ cultural societies with only very limited scope for unique developments and differentiating characteristics (Sieferle, 2010). Once a society had assimilated the first steps on the path towards agriculture, for example the regular harvesting of wild plants, the next logical step, i.  e. the intentional sow­ ing of seed, was inevitable. Although the Neolithic Revolution is an evolution­ ary change between one age and the next, it permanently changed humankind’s basis for civilisation, and the world as a whole. From an economic perspective, sedentariness and agriculture brought previously unimagined material wealth and economic growth. This became particularly apparent in the evolution of advanced agricultural civilisations (Weisdorf, 2005). Compared to the status quo ante, sedentariness, coupled with agriculture and food storage, allowed the evolution of considerably more complex and differentiated societies. Eco­ nomic historians emphasise that an early adoption of agricul­ tural production methods and the farming lifestyle led to such fundamental differences with regard to technological devel­ opment and social organisation. These were so profound that, to a certain degree, they still determine the various countries’ economic output today. Moreover, there are indications, for example in India, that it is less the historical length of time of agricultural production that is decisive in this regard, but rather the respective development stage of the agrarian tradi­ tion, and the technological and social skills adopted thereof (Putterman, 2008). With the economic growth of agricultural societies, their energy demand and the degree of interference in natural environments also increases, as agricultural societies reen­

a change of the ‘high-carbon paradigm’. However, just as in Kondratiev’s long wave theory, innovation theo­ ries tend to look at changes in terms of medium-term time span. Moreover, the complexity of the Great Transforma­ tion goes well beyond changes which are, at their core, technological, something that is addressed by parts of evolutionary economics also deals with. The most dif­ ficult changes which must be brought about in order to achieve the Great Transformation transcend technolo­

gineer their environments far more intensively and system­ atically than hunters and gatherers (Haberl, 2006). Agrarian societies’ main energy source is biomass, which is used more controlled and more intensive than previously (Figure 3.2‑1). Furthermore, a substantially larger share of biomass net pri­ mary production is used as food and feedstock, firewood, and construction material. Although hunters and gatherers also withdraw biomass from their environment, they use this comparatively unsystematically, unmodified and in lower vol­ umes. There is some controversy as to why hunting and gath­ ering was replaced by sedentariness and agriculture, as our knowledge about prehistory is incomplete and largely specu­ lative. All attempts at explanation assume that the climatic changes towards the end of the Ice Age played a decisive role. However, it is unclear whether this impacted negatively on environmental conditions, leading to resource scarcity, or, precisely the opposite, whether this actually improved envi­ ronmental conditions, leading to an overabundance of food. To put it simply, in the first case, a lack of prey would have been the key driver for developing agriculture. In the second case, it would have been the overabundance of prey that would have made sedentariness, the domestication of animals and a more complex degree of organisation, such as the systematic cultivation of wild barley, possible in the first place. A third theory supposes that initially, global warming allowed hunting sedentariness, and a sudden climatic cold snap forced the sedentary hunters to turn to agriculture. A fourth approach looks for an explanation not in the relative improvement or deterioration of environmental conditions through climatic changes, but in the increasing constancy of environmental conditions after the climatically volatile Pleis­ tocene. Whilst hunters and gatherers were flexible and able to adapt to climate fluctuations, the continued constancy of climatic conditions also allowed relatively inflexible, but in the long term more productive lifestyles such as agriculture. Regardless of the specific causes, sedentariness and agri­ culture allowed a historically unprecedented acceleration of cultural, social, technological and economic development. The end of the imperative of always adapting to fluctuating cli­ matic conditions brought other compulsory needs to adapt, and co-evolutionary processes in agriculture (for example the emergence of parasites) and settlement communities (for example competitive pressure through foes, and social dis­ parities). The solution of a problem usually led to an unfore­ seen set of new problems, which again called for responsive action, thereby promoting innovation and development (Sieferle, 2010).

gies – changing lifestyles, for instance, or revolutionis­ ing global cooperation, overcoming policy-related bar­ riers, and dealing responsibly with permanent, crossgenerational changes (Chapters 5, 6). Technologies can help to simplify these challenges of comprehensive economic and social change. However, they are not the ultimate key, or even the only key, to the Great Trans­ formation. Along with the innovation theories and the theory of long waves, transformation theories dealing with the