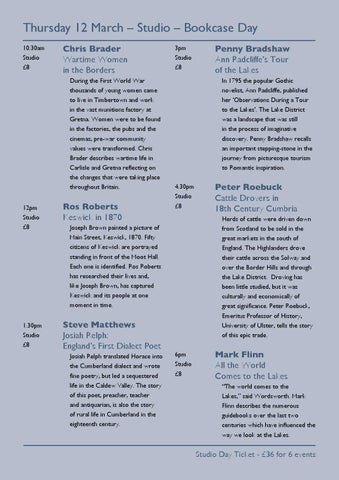 Chris Brader Wartime Women in the Borders During the First World War thousands of young women came to live in Timbertown and work in the vast munitions factory at Gretna. Women were to be found in the factories, the pubs and the cinemas; pre-war community values were transformed. Chris Brader describes wartime life in Carlisle and Gretna reflecting on the changes that were taking place throughout Britain.

Ros Roberts Keswick in 1870 Joseph Brown painted a picture of Main Street, Keswick, 1870. Fifty citizens of Keswick are portrayed standing in front of the Moot Hall. Each one is identified. Ros Roberts has researched their lives and, like Joseph Brown, has captured Keswick and its people at one moment in time.

Steve Matthews Josiah Relph: England’s First Dialect Poet Josiah Relph translated Horace into the Cumberland dialect and wrote fine poetry, but led a sequestered life in the Caldew Valley. The story of this poet, preacher, teacher and antiquarian, is also the story of rural life in Cumberland in the eighteenth century.

Penny Bradshaw Ann Radcliffe’s Tour of the Lakes In 1795 the popular Gothic novelist, Ann Radcliffe, published her ‘Observations During a Tour to the Lakes’. The Lake District was a landscape that was still in the process of imaginative discovery. Penny Bradshaw recalls an important stepping-stone in the journey from picturesque tourism to Romantic inspiration.

Peter Roebuck Cattle Drovers in 18th Century Cumbria Herds of cattle were driven down from Scotland to be sold in the great markets in the south of England. The Highlanders drove their cattle across the Solway and over the Border Hills and through the Lake District. Droving has been little studied, but it was culturally and economically of great significance. Peter Roebuck, Emeritus Professor of History, University of Ulster, tells the story of this epic trade. The Words by the Water Festival of Words and Ideas based at Theatre by the Lake in Keswick, Cumbria runs from 6 - 15 March 2015.

The Words by the Water Festival of Words and Ideas based at Theatre by the Lake in Keswick, Cumbria runs from 6 - 15 March 2015.