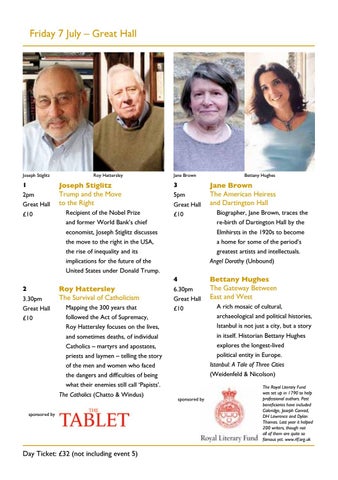 Joseph Stiglitz Trump and the Move to the Right

Roy Hattersley The Survival of Catholicism

Recipient of the Nobel Prize and former World Bank’s chief economist, Joseph Stiglitz discusses the move to the right in the USA, the rise of inequality and its implications for the future of the United States under Donald Trump.

Mapping the 300 years that followed the Act of Supremacy, Roy Hattersley focuses on the lives, and sometimes deaths, of individual Catholics – martyrs and apostates, priests and laymen – telling the story of the men and women who faced the dangers and difficulties of being what their enemies still call ‘Papists’. The Catholics (Chatto & Windus)

Jane Brown The American Heiress and Dartington Hall Biographer, Jane Brown, traces the re-birth of Dartington Hall by the Elmhirsts in the 1920s to become a home for some of the period’s greatest artists and intellectuals. Angel Dorothy (Unbound)

Bettany Hughes The Gateway Between East and West A rich mosaic of cultural, archaeological and political histories, Istanbul is not just a city, but a story in itself. Historian Bettany Hughes explores the longest-lived political entity in Europe. Istanbul: A Tale of Three Cities (Weidenfeld & Nicolson) The Royal Literary Fund was set up in 1790 to help professional authors. Past beneficiaries have included Coleridge, Joseph Conrad, DH Lawrence and Dylan Thomas. Last year it helped 200 writers, though not all of them are quite so famous yet. www.rlf.org.uk