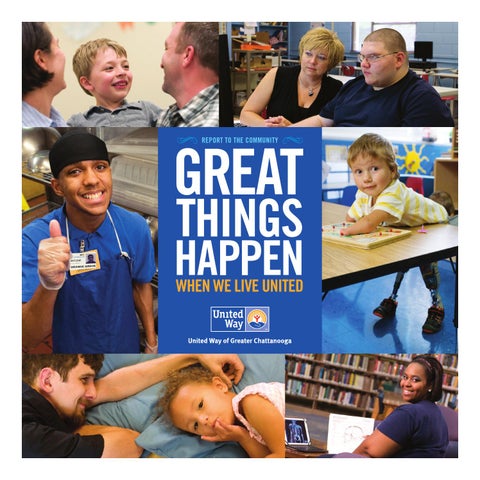 GREAT REPORT TO THE COMMUNITY

HAPPEN WHEN WE LIVE UNITED

“IN ONE YEAR, OUR ENTIRE

FAMILY’S FUTURE HAS CHANGED” These were the words spoken to me during my first week on the job with our United Way. Through tears, Theresa shook my hand and recounted their shift from barely surviving to thriving. After years of financial and educational struggles, her son, who also has special needs was excelling academically and socially, but that’s not all – next month they move out of their trailer and break ground on their first home! In her own words, “thanks to United Way and your partners, we have a future to look forward to that is full of blessing and hope.” What a great and humbling way to start this new adventure! Truly, there are great things happening all over Chattanooga. Here are a few things I have learned in my short time with our United Way. Great things center on results. United Way is focused on them and they are the yardstick for our collective success. How many children start school ready to learn? Are our students graduating with the skills and support for success in work and life? How many families move from resource dependency to self-sufficiency? Is our community meeting needs and making strategic decisions based on real-time data? Each metric represents a building block for a stronger community. Great things involve partnership. Partners – including businesses, government, faith communities, schools and nonprofits – drive the results you see. Your time and giving are multiplied through this network of deep and effective partnerships with 44 funded and 250 unfunded partners. This is in addition to work accomplished through our direct services: Building Stable Lives, 2-1-1, Invest in Children and Youth, the Center for Nonprofits, and the Volunteer Center. Together, we are empowering our community’s greatest resource – our people – in a more strategic way. Great things are intentional. Last year a volunteer army of more than 10,500 local community members joined United Way and our partners. Our collective effort ensures that our 100% of our giving and time stays local to make great things happen here. But what strikes me most are stories of true impact. Every time I hear stories like Theresa’s, it tells me great things are happening now! That’s why I want to share just a few with you in this publication, so generously printed and distributed by the Chattanooga Times Free Press. I hope you will take time to read them and be inspired to get involved! If you’re a United Way partner or giver, you’ve had a hand in the success of the people you’ll meet here. Thank you! If you’ve never given to United Way, I hope you’ll be encouraged to give, either through your workplace campaign, or a secure donation online at LiveUnitedChattanooga.org. Great things don’t just happen. They usually begin with a choice. You can choose to join more than 22,000 of your neighbors to assure that we create more success stories like those you’re about to read. Working together to build a strong community for all – that’s what it means to Live United! Thank you!

TIARA ACHIEVING STABILITY Tiara is an inspiring picture of confidence and success. That’s a stark contrast to where she started. She and her daughter were homeless. Her job didn’t begin to cover her bills. She had no transportation, no prospects. “I couldn’t find housing or a job that paid more than minimum wage,” Tiara remembers. “I was frustrated and living in denial of how I got to this point.” But Tiara had hope, and a vision for a better life. So she found help in United Way’s Building Stable Lives, a program combining coaching, education and access to social services to help families achieve social and financial stability. A Life Coach worked alongside Tiara to help her discover and understand her barriers to stability and the steps she needed to take. Her coach was also a source of encouragement, always pushing Tiara to keep moving forward. In only 18 months, Tiara’s life transformed. Now, she has a home, a reliable car, a better job, and is on the Dean’s List in college as she pursues her nursing degree. During the school year she works nights, attends classes during the day, and spends every spare moment studying and caring for her daughter. “It’s hard work, but I’m doing it,” she says, “Our life is going to be better. It already is.” With guidance and encouragement, Tiara made great things happen for her. United Way partners in stability make that happen for hundreds of families in Chattanooga, offering them hope for a bright future. When families are stable and strong, so is our community.

More than 1,200 participants in Building Stable Lives Neighborhood programs found steady employment or entered an education program, and almost that many now have safe, affordable housing.

ANTOINE LIVING TO THE FULLEST Upbeat. Inspiring. Enthusiastic. Who wouldn’t want to have those words attached to them? Antoine does, because he lives those words every day! Antoine is a proud alumnus of Orange Grove Center’s adult services program, funded by United Way. Antoine happens to have an intellectual disability, but that has never held him back. His upbeat, giving personality continues to touch his teachers, classmates, and employers. Antoine works at Memorial Hospital’s cafeteria, and his friends and employers find his enthusiasm positively infectious. His manager describes one such instance where a classmate was afraid to cross a large metal grate. “One day Antoine ran up to the student and extended his arm to help him cross the grate,” he said. “The other student took his arm and walked across the grate without hesitation — confident that Antoine would keep him safe. And every day thereafter, when those two got to the grate, they walked across it together, arm in arm.” Success isn’t always measured in terms of numbers, salaries, or grades. Often we see it in small gestures and acts of kindness that, when combined, enrich our community in extraordinary ways. Antoine’s example shows that even the smallest acts can lead to great things!

OLIVIA TODDLERS ON TRACK Olivia’s father knew something was wrong when she couldn’t speak. What he didn’t know was why, or what to do next. As children develop, milestones are fast and frequent, especially in the critical first three years of life. When milestones are missed, that can point to trouble. Before she started daycare Olivia took a United Way Learning Checkup, a free, powerful diagnostic tool to gauge how a child is progressing through developmental milestones. “She definitely had a language deficiency,” Olivia’s father recalls. “It really hit home after seeing the test. We could finally follow through and do something to help her.” The Learning Checkup opened doors for early intervention and referrals for therapy. Olivia’s speech improved dramatically in the few short months since receiving her test results. Today she is meeting her developmental milestones, just like the other 2-yearolds in her class. When children are ready for school, great things happen! United Way’s Learning Checkup is a critical tool that helps thousands of parents keep their children on track for success.

TRENTON THRIVING IN SCHOOL Do you know the excitement of closing in on a goal that you thought unattainable? Trenton knows what it feels like, because he’s about to do it. Trenton struggled with school. He had poor grades, low self-esteem, and few friends. But his teachers saw something else—potential and promise. As he prepared to enter high school, his counselor offered him the opportunity to join a group of ninth graders at the Catoosa Performance Learning Center, funded by United Way. As he made the transition to his new education environment, he grew to love it. “You can go at your own pace,” Trenton says. “So if you want to go really fast, you can do that. Or if you want to take it slow, you can do that too.” Students enjoy extensive, ongoing academic support that extends even beyond the classroom. Trenton is now a thriving eleventh grader who excels in his classes. He is often described as the kindest person his friends have ever met. “I had a goal to graduate on time and I’m going to do it,” he says. High school can be a complex maze of social, academic and economic pressures that can throw even the strongest students off track. United Way agency partners in education offer hundreds of students a critical network of support to help them through it. When more students graduate and go on to success, great things happen for them, and our community.

More than 5,000 children served through United Wayfunded academic support programs in 2014 attended school at least 95% of the time, demonstrated positive behavior, and improved their grades.

ANDREW DOING THE IMPOSSIBLE “When you offered him toys, he would just look at them and cry.” That was Andrew. He was born without hands or feet, and faced a childhood confined to a stroller. Born in Ukraine, his adoptive father Ezra, describes when he first met Andrew at 18 months old: “He had lived in a stroller his entire life and could not feed himself, play with toys, do anything on his own.” However, through the Signal Centers Assistive Technology Program funded by United Way, Andrew found strength, confidence, and mobility. The program provides prosthetics training, speech therapy, and ongoing support for Andrew as he grows up. “He’s fully mobile now and can go wherever he wants,” says Ezra. “He figured out how to move even without prosthetics. And he loves to play with his toys.” Technology can be a catalyst for great things! It can create hope and a better quality of life, even for the most vulnerable. When children like Andrew get the help they need to be stronger, our community is, too.

In 2014, more than 800 clients with disabilities found mobility and independence with help from devices through the Assistive Technology Program, funded by United Way.

INVEST IN WHAT’S NEXT GradNation

CORNERSTONES Corporate Cornerstone partners help underwrite our already low administrative costs so United Way can continue to maximize the impact of donor contributions. Thank you to all participating companies! 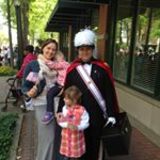 Read the stories about great things happening to people in our community, and how our community is better for it! Thank you to The Brandon...

Read the stories about great things happening to people in our community, and how our community is better for it! Thank you to The Brandon...