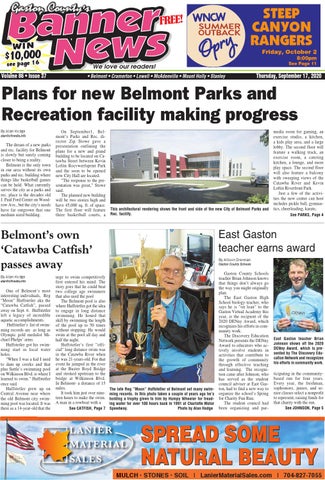 The dream of a new parks and rec. facility for Belmont is slowly but surely coming closer to being a reality. Belmont is the only town in our area without its own parks and rec. building where things like basketball games can be held. What currently serves the city as a parks and rec. place is the decades old J. Paul Ford Center on Woodrow Ave., but the city’s needs have far outgrown that one medium sized building.

On September1, Belmont’s Parks and Rec. director Zip Stowe gave a presentation outlining the plans for a new and grand building to be located on Catawba Street between Kevin Lofitn Rocvwerfoprmt Park and the soon to be opened new City Hall are located. “The response to the presentation was great,” Stowe said. The planned new building will be two stories high and have 45,000 sq. ft. of space. The first floor will feature three basketball courts, a

This architectural rendering shows the front and side of the new City of Belmont Parks and Rec. facility.

Belmont’s own ‘Catawba Catfish’ passes away By Alan Hodge alan@cfmedia.info

One of Belmont’s most interesting individuals, Reg “Moon” Huffstetler aka the “Catawba Catfish”, passed away on Sept. 6. Huffstetler left a legacy of incredible aquatic accomplishments. Huffstetler’s list of swimming records are as long as Olympic gold medalist Michael Phelps’ arms. Huffstetler got his swimming start in local water holes. “When I was a kid I used to dam up creeks and that plus Suttle’s swimming pool on Wilkinson Blvd. is where I learned to swim.” Huffstetler once said. Huffstetler grew up on Central Avenue near where the old Belmont city swimming pool was located. It was there as a 14-year-old that the

urge to swim competitively first entered his mind. The story goes that he could beat two college age swimmers that also used the pool The Belmont pool is also where Huffstetler got the idea to engage in long distance swimming. He honed that skill by swimming the length of the pool up to 50 times without stopping. He would swim at the pool all day and half the night. Huffstetler’s first “official” long distance swim was in the Catawba River when he was 21-years-old. For that event he jumped in the river at the Buster Boyd Bridge and stroked upstream to the bridge at Wilkinson Blvd. In Belmont- a distance of 15 miles. It took him just over nineteen hours to make the swim. A man in a rowboat with a See CATFISH, Page 7

media room for gaming, an exercise studio, a kitchen, a kids play area, and a large lobby. The second floor will feature a walking track, an exercise room, a catering kitchen, a lounge, and more play space. The second floor will also feature a balcony with sweeping views of the Catawba River and Kevin Loftin Riverfront Park. Just a few of the activities the new center can host includes pickle ball, gymnastics, cheerleading, karate, See PARKS, Page 4

The late Reg “Moon” Huffstetler of Belmont set many swimming records. In this photo taken a couple of years ago he’s holding a trophy given to him by Humpy Wheeler for treading water for over 100 hours back in 1991 at Charlotte Motor Speedway. Photo by Alan Hodge

Gaston County Schools teacher Brian Johnson knows that things don’t always go the way you might originally plan. The East Gaston High School biology teacher, who says he is “on loan” to the Gaston Virtual Academy this year, is the recipient of the 2020 DENny Award, which recognizes his efforts in community work. The Discovery Education Network presents the DENny Award to educators who actively involve students in activities that contribute to the growth of community through effective teaching and learning. The recognition came after Johnson, who has served as the student council adviser at East Gaston, had to find a new way to organize the school’s Spring for Charity Fun Run. The student council had been organizing and par-

East Gaston teacher Brian Johnson shows off the 2020 DENny Award, which is presented by The Discovery Education Network and recognizes his efforts in community work. ticipating in the communitybased run for four years. Every year, the freshman, sophomore, junior, and senior classes select a nonprofit to represent, raising funds for that charity with the run. See JOHNSON, Page 5