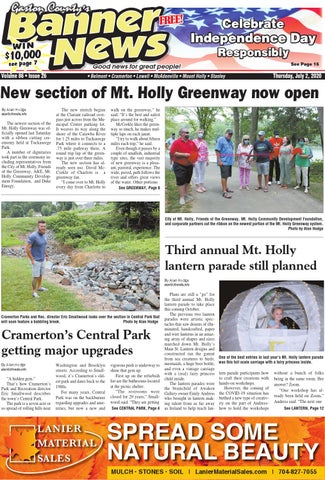 The newest section of the Mt. Holly Greenway was officially opened last Saturday with a ribbon cutting ceremomy held at Tuckaseege Park. A number of dignitaries took part in the ceremony including representatives from the City of Mt. Holly, Friends of the Greenway, A&amp;E, Mt. Holly Community Development Foundation, and Duke Energy.

The new stretch begins at the Clariant railroad overpass just across from the Municipal Center parking lot. It weaves its way along the shore of the Catawba River for 1.25 miles to Tuckaseege Park where it connects to a .75 mile pathway there. A round trip lap of the greenway is just over three miles. The new section has already seen use. David McCorkle of Charlote is a greenway fan. “I come over to Mt. Holly every day from Charlotte to

walk on the greenway,” he said. “It’s the best and safest place around for walking.” McCorkle likes the greenway so much, he makes multiple laps on each jaunt. “I try to walk about fifteen miles each trip,” he said. Even though it passes by a couple of smallish, industrial type sites, the vast majority of new greenway is a pleasant, pastoral, experience. The wide, paved, path follows the river and offers great views of the water. Other portions See GREENWAY, Page 6

City of Mt. Holly, Friends of the Greenway, Mt. Holly Community Development Foundation, and corporate partners cut the ribbon on the newest portion of the Mt. Holly Greenway system. Photo by Alan Hodge

Cramerton Parks and Rec. director Eric Smallwood looks over the section in Central Park that will soon feature a babbling brook. Photo by Alan Hodge

“A hidden gem.” That’s how Cramerton’s Park and Recreation director Eric Smallwood describes the town’s Central Park. The park is a seven acre or so spread of rolling hills near

Washington and Brooklyn streets. According to Smallwood, it’s Cramerton’s oldest park and dates back to the 1980s. For many years, Central Park was on the backburner regarding upgrades and amenities, but now a new and

vigorous push is underway to shine that gem up. First up on the refurbish list are the bathrooms located at the picnic shelter. “The restrooms were closed for 20 years,” Smallwood said. “They are getting See CENTRAL PARK, Page 4

Plans are still a “go” for the third annual Mt. Holly lantern parade to take place this coming October. The previous two lantern parades were artistic spectacles that saw dozens of illuminated, handcrafted, paper and wire lanterns in an amazing array of shapes and sizes marched down Mt. Holly’s Main St. Lantern designs and constructed ran the gamut from sea creatures to birds, One of the best entries in last year’s Mt. Holly lantern parade mermaids, a huge beer bottle, was this full scale carriage with a fairy princess inside. and even a vintage carriage with a (real) fairy princess tern parade participants how without a bunch of folks to craft their creations with being in the same room. Her child inside. The lantern parades were hands-on workshops. answer? Zoom. However, the coming of the brainchild of Awaken “One workshop has alGallery owner Emily Andress the COVID-19 situation has ready been held on Zoom,” who brought in lantern mak- birthed a new type of creativing talent from as far away ity on the part of Andress- Andress said. “The next one See LANTERN, Page 12 as Ireland to help teach lan- how to hold the workshops