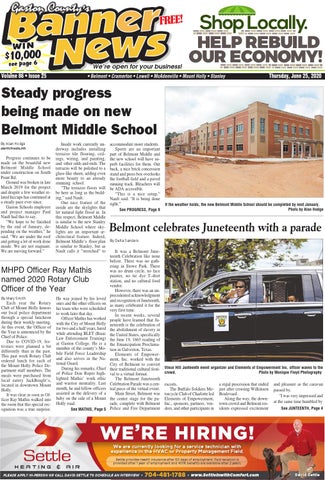 Steady progress being made on new Belmont Middle School By Alan Hodge alan@cfmedia.info

Progress continues to be made on the beautiful new Belmont Middle School under construction on South Point Rd. Ground was broken in late March 2019 for the project and despite a few weather related hiccups has continued at a steady pace ever since. Gaston Schools employee and project manager Paul Nault had this to say. “We hope to be finished by the end of January, depending on the weather,” he said. “We are under the roof and getting a lot of work done inside. We are not stagnant. We are moving forward.”

Inside work currently underway includes installing terrazzo tile flooring, ceilings, wiring, and painting, and other odds and ends. The terrazzo will be polished to a glass-like sheen, adding even more beauty to an already stunning school. “The terrazzo floors will be here as long as the building,” said Nault. One nice feature of the inside are the skylights that let natural light flood in. In this respect, Belmont Middle is similar to the new Stanley Middle School where skylights are an important architectural feature. Indeed, Belmont Middle’s floor plan is similar to Stanley, but as Nault calls it “stretched” to

MHPD Officer Ray Mathis named 2020 Rotary Club Officer of the Year By Mary Smith Each year the Rotary Club of Mount Holly honors our local police department through a special luncheon during their weekly meeting. At this event, the Officer of the Year is announced by the Chief of Police. Due to COVID-19, festivities were planned a bit differently than in the past. This past week Rotary Club ordered lunch for each of the Mount Holly Police Department staff members. The meals were purchased from local eatery JackBeagle’s, located in downtown Mount Holly. It was clear as soon as Officer Ray Mathis walked into the room that this special recognition was a true surprise.

He was joined by his loved ones and the other officers on his team who were scheduled to work later that day. Officer Mathis has worked with the City of Mount Holly for two and a half years, hired while attending BLET (Basic Law Enforcement Training) at Gaston College. He is a member of the county’s Mobile Field Force Leadership and also serves in the National Guard. During his remarks, Chief of Police Don Roper highlighted Mathis’ work ethic and warrior mentality. Last month, he and fellow officers assisted in the delivery of a baby on the side of a Mount Holly road. See MATHIS, Page 5

accommodate more students. Sports are an important part of Belmont Middle and the new school will have superb facilities for them. Out back, a nice brick concession stand and press box overlooks the football field and a paved running track. Bleachers will be ADA accessible. “This is a nice setup,” Nault said. “It is being done right.” See PROGRESS, Page 9

If the weather holds, the new Belmont Middle School should be completed by next January. Photo by Alan Hodge

Belmont celebrates Juneteenth with a parade By Delta Sanders It was a Belmont Juneteenth Celebration like none before. There was no gathering in Stowe Park. There was no drum circle, no face painter, no tie dye T-shirt station, and no cultural food vendor. However, there was an unprecedented acknowledgment and recognition of Juneteenth, as many celebrated it for the very first time. In recent weeks, several people have learned that Juneteenth is the celebration of the abolishment of slavery in the United States, specifically the June 19, 1865 reading of the Emancipation Proclamation in Galveston, Texas. Elements of Empowerment, Inc. worked with the City of Belmont to convert their traditional cultural festival to a virtual format. The Belmont Juneteenth Celebration Parade was a central piece of the virtual event. Main Street, Belmont was the center stage for the parade, complete with Belmont Police and Fire Department

a regal procession that ended just after crossing Wilkinson Boulevard. Along the way, the downtown crowd and Belmont residents expressed excitement

and pleasure as the caravan passed by. “I was very impressed and at the same time humbled by See JUNTEENTH, Page 4

We are currently looking for a service technician with experience in the HVAC or Property Management Field. Settle provides health insurance after 60 days of employment. Paid vacation is provided after 1 year of employment and 401K benefits are available after 2 years. PLEASE APPLY IN-PERSON OR CALL DAVID SETTLE TO SCHEDULE AN INTERVIEW •