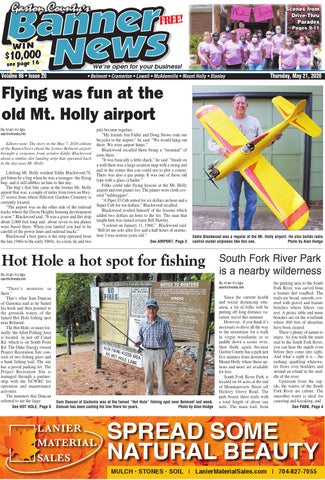 Flying was fun at the old Mt. Holly airport By Alan Hodge alan@cfmedia.info

Editors note- The story in the May 7, 2020 edition of the BannerNews about the former Belmont airport brought a response from aviator Eddie Blackwood about a similar dirt landing strip that operated back in the day near Mt. Holly. Lifelong Mt. Holly resident Eddie Blackwood,78, got bitten by a bug when he was a teenager- the flying bug- and it still nibbles on him to this day. The bug’s first bite came at the former Mt. Holly airport that was a couple of miles from town on Hwy. 27 across from where Hillcrest Gardens Cemetery is currently located. “The airport was on the other side of the railroad tracks where the Dixon Heights housing development is now,” Blackwood said. “It was a grass and dirt strip about 2,000 feet long and about seven to ten planes were based there. When you landed you had to be careful of the power lines and railroad tracks.” Blackwood’s best guess is the strip operated from the late 1940s to the early 1960s. As a teen, he and two

pals became regulars. “My friends Jim Fuller and Doug Stowe rode our bicycles to the airport,” he said. “We would hang out there. We were airport bums.” Blackwood recalled there being a “terminal” of sorts there. “It was basically a little shack,” he said. “Inside on a wall there was a large aviation map with a string and nail in the center that you could use to plot a course. There was also a gas pump. It was one of those old type with a glass cylinder.” Folks could take flying lessons at the Mt. Holly airport and rent planes too. The planes were cloth covered “taildraggers”. “A Piper J3 Cub rented for six dollars an hour and a Super Cub for ten dollars,” Blackwood recalled. Blackwood availed himself of the lessons which added two dollars an hour to the fee. The man that taught him was famed aviator Bill Hawley. “I soloed on January 11, 1968,” Blackwood said. “Bill let me solo after five and a half hours of instruction. I was sixteen years old.” See AIRPORT, Page 3

Eddie Blackwood was a regular at the Mt. Holly airport. He also builds radio control model airplanes like this one. Photo by Alan Hodge

“There’s monsters in there.” That’s what Sam Duncan of Gastonia said as he baited his hook and then pointed to the greenish waters of the famed Hot Hole fishing spot near Belmont. The Hot Hole, or more formally, the Allen Fishing Area is located in just off Canal Rd. which is on South Point Rd. The Duke Energy owned Project Recreation Site consists of two fishing piers and a bank fishing trail. The site has a paved parking lot. The Project Recreation Site is managed through a partnership with the NCWRC for operation and maintenance activities. The monsters that Duncan referred to are the large See HOT HOLE, Page 6

South Fork River Park is a nearby wilderness By Alan Hodge alan@cfmedia.info

Sam Duncan of Gastonia was at the famed “Hot Hole” fishing spot near Belmont last week. Duncan has been casting his line there for years. Photo by Alan Hodge

Since the current health and social distancing situation, a lot of folks will be putting off long distance vacation travel this summer. However, if you think it’s necessary to drive all the way to the mountains for a walk in virgin woodlands or to paddle down a scenic river, then think again because Gaston County has a park just five minutes from downtown Mount Holly where those options and more are available for free. South Fork River Park is located on 44 acres at the end of Mountainview Street off Hickory Grove Road. The park boasts three trails with a total length of about one mile. The main trail, from

the parking area to the South Fork River, was carved from a former dirt roadbed. The trails are broad, smooth, covered with gravel and feature benches where hikers can rest. A picnic table and more benches are on the riverbank where 800 feet of shoreline have been cleared. There’s plenty of nature to enjoy. As you walk the main trail to the South Fork River, you can hear the rapids even before they come into sight. And what a sight it is – the rushing, sparkling whitewater flows over boulders and around an island in the middle of the river. Upstream from the rapids, the waters of the South Fork River are calmer. The smoother water is ideal for canoeing and kayaking, and See PARK, Page 4