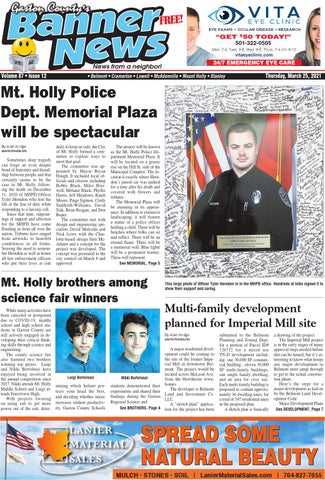 Sometimes deep tragedy can forge an even deeper bond of fraternity and friendship between people and that certainly seems to be the case in Mt. Holly following the death on December 11, 2020 of MHPD Officer Tyler Herndon who lost his life in the line of duty while responding to a larceny call. Since that time, outpourings of support and affection for the MHPD have come flooding in from all over the nation. Tributes have ranged from artworks to heartfelt condolences in all forms. Sensing the need to remember Herndon as well as honor all law enforcement officers who put their lives at risk

daily to keep us safe, the City of Mt. Holly formed a committee to explore ways to meet that goal. The committee was appointed by Mayor Bryan Hough. It included local officials and citizens including Bobby Black, Miles Braswell, Melanie Black, Phyllis Harris, Jeff Meadows, Randi Moore, Paige Sigmon, Cindy Suddreth-Williams, David Sisk, Brian Reagan, and Don Roper. The committee met with design and engineering specialists David Malcolm and Nick Lowe with the Charlotte-based design firm McAdams and a concept for the project was developed. The concept was presented to the city council on March 8 and approved.

The project will be known as the Mt. Holly Police Department Memorial Plaza. It will be located on a grassy rise on the Hill St. side of the Municipal Complex. The location is exactly where Herndon’s patrol car was parked for a time after his death and covered with flowers and tributes. The Memorial Plaza will be stunning in its appearance. In addition to extensive landscaping, it will feature a statue of a police officer holding a child. There will be benches where folks can sit and reflect. There will be an eternal flame. There will be a memorial wall. Blue lights will be a prominent feature. These will represent See MEMORIAL, Page 5

Mt. Holly brothers among science fair winners While many activities have been canceled or postponed due to COVID-19, middle school and high school students in Gaston County are still actively engaged in developing their critical thinking skills through science and engineering. The county science fair also featured two brothers winning top prizes. Luigi and Nikki Bortolussi have enjoyed being involved in the annual competition since 2017. Nikki attends Mt. Holly Middle School and Luigi attends Forestview High. With projects focusing on using salt to get more power out of the soil, deter-

This large photo of Officer Tyler Herndon is in the MHPD office. Hundreds of folks signed it to show their support and caring.

students demonstrated their experiments and shared their findings during the Gaston Regional Science and See BROTHERS, Page 4

A major residential development could be coming to the site of the former Imperial Mill in downtown Belmont. The project would be located across McLeod Ave. from the Hawthorne townhomes. The developer is Belmont Land and Investment Co. LLC. A “sketch plan” application for the project has been

submitted to the Belmont Planning and Zoning Dept. for a portion of Parcel ID# 126732 for a mixed use TN-D development including one 30,000 SF commercial building , eleven 30,000 SF multi-family buildings, one single family dwelling, and an area for civic use. Each multi-family building is proposed to contain approximately 36 dwelling units, for a total of 397 residential units in the proposed plan. A sketch plan is basically

a drawing of the project. The Imperial Mill project is in the early stages of many approval steps needed before dirt can be turned, but it’s interesting to know what hoops any major development in Belmont must jump through to get to the actual construction phase. Here’s the steps for a major development as laid on by the Belmont Land Development Code: Major Development Plans See DEVELOPMENT, Page 7