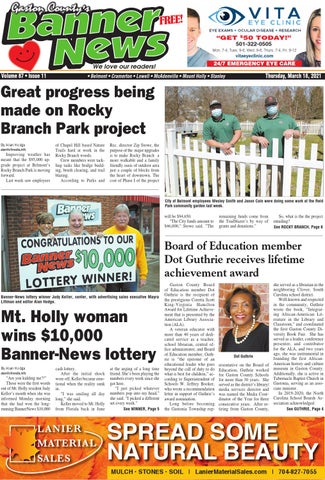 Great progress being made on Rocky Branch Park project By Alan Hodge alan@cfmedia.info

of Chapel Hill based Nature Trails hard at work in the Rocky Branch woods. Crew members were tackling tasks like bridge building, brush clearing, and trail blazing. According to Parks and

Rec. director Zip Stowe, the purpose of the major upgrades is to make Rocky Branch a more walkable and a family friendly oasis of outdoor area just a couple of blocks from the heart of downtown. The cost of Phase I of the project

City of Belmont employees Wesley Smith and Jason Cain were doing some work at the Reid Park community garden last week. will be $94,650. “The City funds amount to $46,000,” Stowe said. “The

remaining funds come from the Trailblazer’s by way of grants and donations.”

So, what is the the project entailing? See ROCKY BRANCH, Page 6

“Are you kidding me?!” Those were the first words out of Mt. Holly resident Judy Keller’s mouth when she was informed Monday morning that she had won the longrunning BannerNews $10,000

cash lottery. After the initial shock wore off, Keller became emotional when the reality sunk in. “I was smiling all day long,” she said. Keller moved to Mt. Holly from Florida back in June

at the urging of a long time friend. She’s been playing the numbers every week since she got here. “I just picked whatever numbers pop into my head,” she said. “I picked a different set every week.” See WINNER, Page 5

Gaston County Board of Education member Dot Guthrie is the recipient of the prestigious Coretta Scott King-Virginia Hamilton Award for Lifetime Achievement that is presented by the American Library Association (ALA). A veteran educator with more than 40 years of dedicated service as a teacher, school librarian, central office administrator, and Board of Education member, Guthrie is “the epitome of an educational leader who goes beyond the call of duty to do what is best for children,” according to Superintendent of Schools W. Jeffrey Booker, who wrote a recommendation letter in support of Guthrie’s award nomination. Long before becoming the Gastonia Township rep-

Dot Guthrie resentative on the Board of Education, Guthrie worked for Gaston County Schools for more than 30 years. She served as the district’s library/ media services director and was named the Media Coordinator of the Year for three consecutive years. After retiring from Gaston County,

she served as a librarian in the neighboring Clover, South Carolina school district. Well-known and respected in the community, Guthrie wrote the book, “Integrating African-American Literature in the Library and Classroom,” and coordinated the first Gaston County Diversity Book Fair. She has served as a leader, conference presenter, and contributor for the ALA, and two years ago, she was instrumental in founding the first AfricanAmerican history and culture museum in Gaston County. Additionally, she is active in Tabernacle Baptist Church in Gastonia, serving as an associate minister. In 2019-2020, the North Carolina School Boards Association acknowledged See GUTHRIE, Page 4