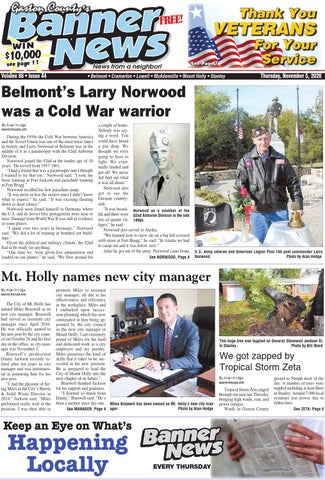 VETERANS For Your Service

News from a neighbor!

During the 1950s the Cold War between America and the Soviet Union was one of the most tense times in history and Larry Norwood of Belmont was in the middle of it as a paratrooper with the 82nd Airborne Division. Norwood joined the 82nd at the tender age of 18 years. He served from 1957-1961. “I had a friend that was a paratrooper and I thought I wanted to try that too,” Norwood said. “I took my basic training at Fort Jackson and parachute training at Fort Bragg.” Norwood recalled his first parachute jump. “It was more or less the easiest since I didn’t know what to expect,” he said. “It was exciting floating down in dead silence.” Norwood soon found himself in Germany where the U.S. and its Soviet bloc protagonists were nose to nose. Damage from World War II was still in evidence in some places. “I spent over two years in Germany,” Norwood said. “We did a lot of training in bombed out buildings.” Given the political and military climate, the 82nd had to be ready for anything. “One time we were given live ammunition and loaded on our planes,” he said. “We flew around for

a couple of hours. Nobody was saying a word. You could have heard a pin drop. We thought we were going to have to fight. We eventually landed and got off. We never did find out what it was all about.” Norwood also got to see the German countryside. “It was beauti- Norwood as a member of the ful and there were 82nd Airborne Division in the late lots of quaint vil- 1950s. lages,” he said. Norwood also served in Alaska. “We learned how to snow ski on a big hill covered with straw at Fort Bragg,” he said. “In Alaska we had to camp out and it was below zero.” After he got out of the army, Norwood came home See NORWOOD, Page 4

The City of Mt. Holly has named Miles Braswell as its new city manager. Braswell had served as assistant city manager since April 2016. He was officially named to his new post by the city council on October 26 and his first day in the office as city manager was November 2. Braswell’s predecessor Danny Jackson recently retired after ten years as city manager and was instrumental in preparing him for his new post. “I had the pleasure of hiring Miles as the City’s Streets &amp; Solid Waste Director in 2014,” Jackson said. “Miles performed really well at the position. I was then able to

promote Miles to assistant city manager, all due to his effectiveness and efficiency in the workplace. Miles and I embarked upon succession planning which has now culminated in him being appointed by the city council as the new city manager in Mount Holly. I am extremely proud of Miles for his hard and dedicated work as a city employee and my partner. Miles possesses the kind of skills that it takes to be successful in his new position. He is prepared to lead the City of Mount Holly into the next chapter of its future.” Braswell thanked Jackson for his support and guidance. “I learned so much from Danny,” Braswell said. “He’s been a mentor since day one. Miles Braswell has been named as Mt. Holly’s new city manPhoto by Alan Hodge See MANAGER, Page 4 ager.

This huge tree was toppled on General Stonewall Jackson St. in Stanley. Photo by Bill Ward

We got zapped by Tropical Storm Zeta By Alan Hodge alan@cfmedia.info

gusted to 50mph most of the day. A number of trees were toppled including at least three in Stanley. Around 7,000 local residents lost power due to fallen lines. See ZETA, Page 4