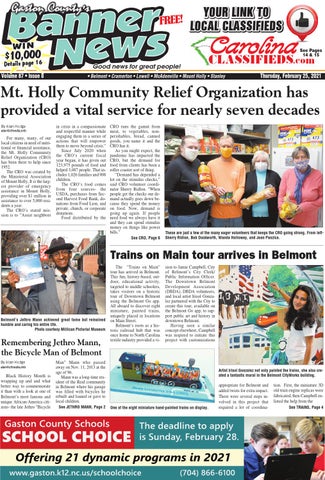 YOUR LINK TO LOCAL CLASSIFIEDS

For many, many, of our local citizens in need of nutritional or financial assistance, the Mt. Holly Community Relief Organization (CRO) has been there to help since 1952. The CRO was created by the Ministerial Association of Mount Holly, It is the largest provider of emergency assistance in Mount Holly, providing over $1 million in assistance to over 5,000 residents a year. The CRO’s stated mission is to “Assist neighbors

in crisis in a compassionate and respectful manner while engaging them in a series of actions that will empower them to move beyond crisis.” Since July 2020 when the CRO’s current fiscal year began, it has given out 123,975 pounds of food and helped 3,087 people. That includes 1,026 families and 908 children. The CRO’s food comes from four sources- the USDA, purchases from Second Harvest Food Bank, donations from Food Lion, and private, church, or corporate donations. Food distributed by the

CRO runs the gamut from meat, to vegetables, nonperishables, bread, canned goods, you name it and the CRO has it. As you might expect, the pandemic has impacted the CRO, but the demand for food from clients has been a roller coaster sort of thing. “Demand has depended a lot on the stimulus checks,” said CRO volunteer coordinator Sherry Ridlon. “When people get the checks our demand actually goes down because they spend the money on food. Now, demand is going up again. If people need food we always have it and they can spend stimulus money on things like power bills.” See CRO, Page 6

These are just a few of the many eager volunteers that keeps the CRO going strong. From leftSherry Ridlon, Bob Duckworth, Wanda Holloway, and Jean Panzica.

Man” Mann who passed away on Nov. 11, 2013 at the age of 96. Mann was a long-time resident of the Reid community in Belmont where his garage was filled with bicycles he rebuilt and loaned or gave to local children. See JETHRO MANN, Page 2

The “Trains on Main” tour has arrived in Belmont. This fun, history-based, outdoor, educational activity, targeted to middle schoolers, takes visitors on a historic tour of Downtown Belmont using the Belmont Go app. All aboard to discover eight miniature, painted trains, uniquely placed in locations on Main Street. Belmont’s roots as a historic railroad hub that was once home to North Carolina textile industry provided a vi-

sion to Jamie Campbell, City of Belmont’s City Clerk/ Public Information Officer. The Downtown Belmont Development Association (DBDA), DBDA volunteers, and local artist Irisol Gonzalez partnered with the City to create this tour, available on the Belmont Go app, to support public art and history in downtown Belmont. Having seen a similar concept elsewhere, Campbell was inspired to initiate this project with customizations

Artist Irisol Gonzalez not only painted the trains, she also created a fantastic mural in the Belmont CityWorks building.

One of the eight miniature hand-painted trains on display.

appropriate for Belmont and added twists for extra impact. There were several steps involved in this project that required a lot of coordina-