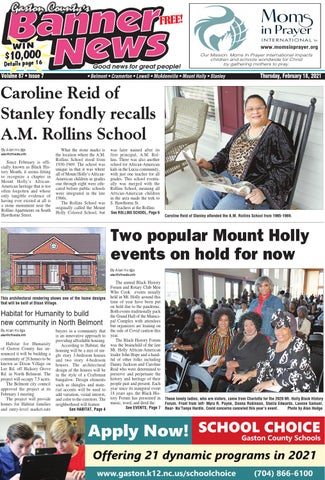 Since February is officially known as Black History Month, it seems fitting to recognize a chapter in Mount Holly’s AfricanAmerican heritage that is too often forgotten and whose only tangible evidence of having ever existed at all is a stone monument near the Rollins Apartments on South Hawthorne Street.

What the stone marks is the location where the A.M. Rollins School stood from 1930-1969. The school was unique in that it was where all of Mount Holly’s AfricanAmerican children in grades one through eight were educated before public schools were integrated in the late 1960s. The Rollins School was originally called the Mount Holly Colored School, but

was later named after its first principal, A.M. Rollins. There was also another school for African-American kids in the Lucia community, with just one teacher for all grades. This school eventually was merged with the Rollins School, meaning all African-American children in the area made the trek to S. Hawthorne St. Teachers at the Rollins See ROLLINS SCHOOL, Page 6

This architectural rendering shows one of the home designs that will be built at Dixon Village.

Habitat for Humanity of Gaston County has announced it will be building a community of 28 homes to be known as Dixon Village on Lee Rd. off Hickory Grove Rd. in North Belmont. The project will occupy 7.5 acres. The Belmont city council approved the project at its February 1 meeting. The project will provide homes for Habitat families and entry-level market-rate

buyers in a community that is an innovative approach to providing affordable housing. According to Habitat, the housing will be a mix of single story 3-bedroom houses and two story 4-bedroom houses. The architectural design of the houses will be in the style of a Craftsman bungalow. Design elements such as shingles and material accents will be used to add variation, visual interest, and color to the exteriors. The neighborhood will feature See HABITAT, Page 4

The annual Black History Forum and Rotary Club Men Who Cook events usually held in Mt. Holly around this time of year have been put on hold due to the pandemic. Both events traditionally pack the Grand Hall of the Municipal Complex with attendees but organizers are leaning on the side of Covid caution this year. The Black History Forum was the brainchild of the late Mt. Holly African-American leader John Hope and a handful of other folks including Danny Jackson and Caroline Reid who were determined to preserve and perpetuate the history and heritage of their people past and present. Each year since its inaugural event 18 years ago, the Black History Forum has presented in These lovely ladies, who are sisters, came from Charlotte for the 2020 Mt. Holly Black History music, word, and deed the Forum. Front from left- Myra R. Payne, Donna Robinson, Sheila Edwards, Lavone Samuel. See EVENTS, Page 7 Rear- Na’Tanya Hardin. Covid concerns canceled this year’s event. Photo by Alan Hodge