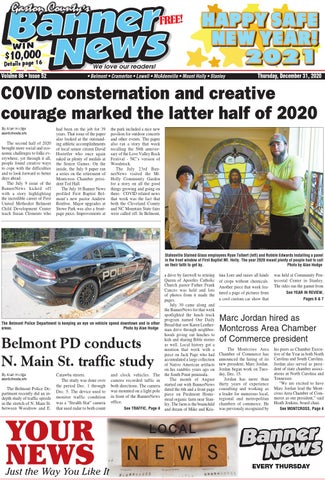 COVID consternation and creative courage marked the latter half of 2020 By Alan Hodge alan@cfmedia.info

The second half of 2020 brought more social and economic challenges to folks everywhere, yet through it all, people found creative ways to cope with the difficulties and to look forward to better days ahead. The July 9 issue of the BannerNews kicked off with a story highlighting the incredible career of First United Methodist Belmont Child Development Center teach Susan Clements who

had been on the job for 39 years. That issue of the paper also looked at the outstanding athletic accomplishments of local senior citizen David Hostetler who once again raked in plenty of medals at the Senior Games. On the inside, the July 9 paper ran a series on the retirement of Montcross Chamber president Ted Hall. The July 16 Banner News profiled First Baptist Belmont’s new pastor Andrew Renfroe. Major upgrades at Stowe Park was also a frontpage piece. Improvements at

the park included a nice new pavilion for outdoor concerts and other events. The paper also ran a story that week recalling the 50th anniversary of the Love Valley Rock Festival - NC’s version of Woodstock. The July 23rd BannerNews visited the Mt. Holly Community Garden for a story on all the good things growing and going on there. COVID related news that week was the fact that both the Cleveland County and NC Mountain State fairs were called off. In Belmont,

Statesville Stained Glass employees Ryan Tulbert (left) and Robbie Edwards installing a panel in the front window of First Baptist Mt. Holly. The year 2020 meant plenty of people had to call on their faith to get by. Photo by Alan Hodge

The Belmont Police Department is keeping an eye on vehicle speed downtown and in other areas. Photo by Alan Hodge

The Belmont Police Department recently did an indepth study of traffic speeds in the stretch of N. Main St. between Woodrow and E.

Catawba streets. The study was done over the period Dec. 1 through Dec. 5. The device used to monitor traffic condition was a “Stealth Stat” camera that used radar to both count

and clock vehicles. The camera recorded taffic in both directions. The camera was mounted on a light pole in front of the BannerNews office. See TRAFFIC, Page 4

a drive by farewell to retiring Queen of Apostles Catholic Church pastor Father Frank Cancro was held and lots of photos from it made the pages. July 30 came along and the BannerNews for that week spotlighted the lunch truck program named Our Daily Bread that saw Karen Leatherman drive through neighborhoods giving out lunches to kids and sharing Bible stories as well. Local history got a mention that week with a piece on Jack Page who had accumulated a large collection of Native American artifacts on his rambles years ago on the South Point peninsula. The month of August started out with BannerNews dated the 6th and a front page piece on Piedmont Homestead organic farm near Stanley. The farm is the brainchild and dream of Mike and Kris-

tina Lore and raises all kinds of crops without chemicals. Another piece that week featured a page of pictures from a cool custom car show that

was held at Community Pentecostal Center in Stanley. The rides ran the gamut from See YEAR IN REVIEW, Pages 6 &amp; 7

Marc Jordan hired as Montcross Area Chamber of Commerce president The Montcross Area Chamber of Commerce has announced the hiring of its new president, Marc Jordan. Jordan began work on Tuesday, Dec. 15. Jordan has more than thirty years of experience consulting and working as a leader for numerous local, regional and metropolitan chambers of commerce. He was previously recognized by

his peers as Chamber Executive of the Year in both North Carolina and South Carolina. Jordan also served as president of state chamber associations in North Carolina and Tennessee. “We are excited to have Marc Jordan lead the Montcross Area Chamber of Commerce as our president,” said Heath Jenkins, board chair. See MONTCROSS, Page 4