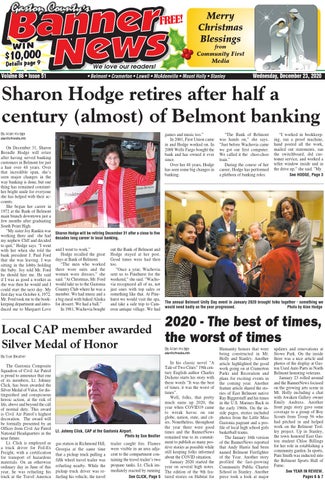 Sharon Hodge retires after half a century (almost) of Belmont banking By Alan Hodge alan@cfmedia.info

On December 31, Sharon Brendle Hodge will retire after having served banking customers in Belmont for just a hair over 48 years. Over that incredible span, she’s seen major changes in the way banking is done, but one thing has remained constanther bright smile for everyone she has helped with their accounts. She began her career in 1972 at the Bank of Belmont main branch downtown just a few months after graduating South Point High. “My sister Joy Rankin was Sharon Hodge will be retiring December 31 after a close to five working there and she had decades long career in local banking. my nephew Cliff and decided to quit,” Hodge says. “I went out the Bank of Belmont and with her when she told the and I went to work.” Hodge stayed at her post. Hodge recalled the great bank president J. Paul Ford Good times were had then that she was leaving. I was days at Bank of Belmont. “The men who worked too. sitting in the lobby holding “Once a year, Wachovia the baby. Joy told Mr. Ford there wore suits and the he should hire me. He said women wore dresses,” she sent us to Pinehurst for the if I was as good a worker as said. “At Christmas, Mr. Ford weekend,” she said. “Wachoshe was then he would and I would take us to the Gastonia via recognized all of us, not could start the next day. My Country Club where he was a just ones with top sales or first day was October 4, 1972. member. We had music and a something like that. At PineMr. Ford took me to the book- a big meal with baked Alaska hurst we would visit the spa, and take a side trip to Camkeeping department and intro- for dessert. We had a ball.” In 1981, Wachovia bought eron antique village. We had duced me to Margaret Love

games and music too.” In 2001, First Union came in and Hodge worked on. In 2008 Wells Fargo bought the bank and has owned it ever since. Over her 48 years, Hodge has seen some big changes in banking.

“The Bank of Belmont was hands on,” she says. “Just before Wachovia came we got our first computer. We called it the choo-choo train.” During the course of her career, Hodge has performed a plethora of banking roles.

“I worked in bookkeeping, ran a proof machine, hand posted all the work, mailed out statements, ran the switchboard, did customer service, and worked a teller window inside and in the drive up,” she said. “My See HODGE, Page 3

The annual Belmont Unity Day event in January 2020 brought folks together - something we would need badly as the year progressed. Photo by Alan Hodge

2020 The best of times, Local CAP member awarded the worst of times Silver Medal of Honor By Alan Hodge

By Sue Beutler The Gastonia Composite Squadron of Civil Air Patrol is proud to announce that one of its members, Lt. Johnny Click, has been awarded the Silver Medal of Valor, for distinguished and conspicuous heroic action, at the risk of life, above and beyond the call of normal duty. This award is Civil Air Patrol’s highest decoration. The award will be formally presented by an Officer from Civil Air Patrol National Headquarters in the near future. Lt. Click is employed as a truck driver for Fed-Ex Freight, with a certification for transport of hazardous materials. On an otherwise ordinary day in June of this year, he was refueling his truck at the Travel America

Lt. Johnny Click, CAP at the Gastonia Airport. Photo by Sue Beutler gas station in Richmond Hill, Georgia at the same time that a pickup truck pulling a fifth wheel travel trailer was refueling nearby. While the pickup truck driver was refueling his vehicle, the travel

In his classic novel “A Tale of Two Cities” 19th century English author Charles Dickens starts his story with these words “It was the best of times, it was the worst of times”. Well, folks, that pretty much sums up 2020, the year when COVID19 came to wreak havoc on our globe, nation, state, and cities. Nonetheless, throughout the year there were good times and the BannerNews remained true to its commitment to publish as many positive stories as possible while still keeping folks informed about the COVID situation. January 2020 started the year on several high notes. The edition of the 9th featured stories on Habitat for

Humanity houses that were being constructed in Mt. Holly and Stanley. Another article highlighted the good work going on at Cramerton Parks and Recreation and plans for exciting events in the coming year. Another feature article shared the stories of East Belmont native Ray Biggerstaff and his times in the U.S. Marines Back in the early 1960s. On the inside pages, stories included photos from the Little Miss Gastonia pageant and a profile of local high school girls basketball teams. The January 16th version of the BannerNews reported that Andy Harris had been named Belmont Firefighter of the Year. Another story profiled the fast-growing Community Public Charter School in Stanley. Another piece took a look at major

updates and renovations at Stowe Park. On the inside there was a nice article and photos of the display at Gaston Used Auto Parts in North Belmont honoring veterans. January 23 rolled around and the BannerNews focused on the growing arts scene in Mt. Holly including a chat with Awaken Gallery owner Emily Andress. Another front page story gave some coverage to a group of Boy Scouts from Troop 56 who had pitched in and helped work on the Belmont Trolley project. Up in Stanley, the town honored East Gaston student Chloe Billings for her role in establishing a community garden. In sports, Pam Smith was inducted into the Belmont Sports Hall of Fame. See YEAR IN REVIEW, Pages 6 &amp; 7