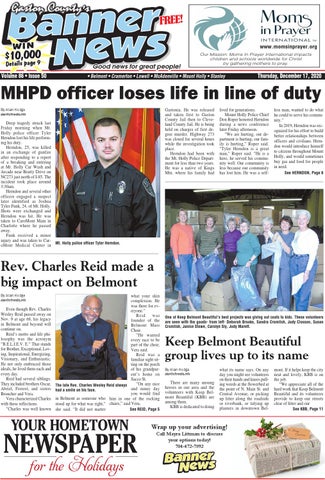 Gastonia. He was released and taken first to Gaston County Jail then to Cleveland County Jail. He is being held on charges of first degree murder. Highway 273 was closed for several hours while the investigation took place. Herndon had been with the Mt. Holly Police Department for less than two years. He was a native of Kings Mtn. where his family had

Deep tragedy struck last Friday morning when Mt. Holly police officer Tyler Herndon lost his life performing his duty. Herndon, 25, was killed in an exchange of gunfire after responding to a report of a breaking and entering at Mt. Holly Car Wash and Arcade near Beatty Drive on NC273 just north of I-85. The incident took place around 3:30am. Herndon and several other officers engaged a suspect later identified as Joshua Tyler Funk, 24, of Mt. Holly. Shots were exchanged and Herndon was hit. He was taken to CaroMont Main in Charlotte where he passed away. Funk received a minor injury and was taken to CaroMont Medical Center in

less man, wanted to do what he could to serve his community.” In 2019, Herndon was recognized for his effort to build better relationships between officers and civilians. Herndon would introduce himself to citizens throughout Mount Holly, and would sometimes buy gas and food for people in need. See HERNDON, Page 6

Rev. Charles Reid made a big impact on Belmont By Alan Hodge

what your skin complexion. He was there for evEven though Rev. Charles eryone.” Wesley Reid passed away on Reid was Nov. 9 at age 68, his legacy founder of the in Belmont and beyond will Belmont Mass continue on. Choir. Reid’s motto and life phi“He wanted losophy was the acronym every race to be “B.E.L.I.E.V. E.” That stands part of the choir, for Brother, Exceptional, LovVera said. ing, Inspirational, Energizing, Reid was a Visionary, and Enthusiastic. familiar sight sitHe not only embraced those ting on the porch ideals, he lived them each and of his grandparevery day. ent’s home on Reid had several siblings. Sacco St. They included brothers Oscar, The late Rev. Charles Wesley Reid always “On any nice and sunny day Abriel, Forrest, and sisters had a smile on his face. you would find Broncher and Vera. Vera characterized Charles in Belmont as someone who him in one of the rocking stood up for what was right,” chairs,” said Vera. with these reflections. “Charles was well known she said. “It did not matter See REID, Page 5 alan@cfmedia.info

Keep Belmont Beautiful group lives up to its name By Alan Hodge alan@cfmedia.info

There are many unsung heroes in our area and the volunteers with Keep Belmont Beautiful (KBB) are among them. KBB is dedicated to doing

what its name says. On any day you might see volunteers on their hands and knees pulling weeds at the flowerbed at the point of N. Main St. and Central Avenue, or picking up litter along the roadside or riverbank, or tidying up planters in downtown Bel-

Wrap up your advertising! Call Mayra Littman to discuss your options today! 704-472-7892

mont. If it helps keep the city neat and lovely, KBB is on the job. “We appreciate all of the hard work that Keep Belmont Beautiful and its volunteers provide to keep our streets clear of litter and our See KBB, Page 11