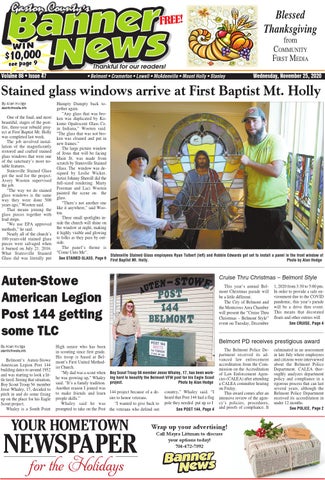 One of the final, and most beautiful, stages of the postfire, three-year rebuild project at First Baptist Mt. Holly was completed last week. The job involved installation of the magnificently restored and crafted stained glass windows that were one of the sanctuary’s most notable features. Statesville Stained Glass got the nod for the project. Avery Wooten supervised the job. “The way we do stained glass windows is the same way they were done 500 years ago,” Wooten said. That means joining the glass pieces together with lead strips. “We use EPA approved methods,” he said. Nearly all of the church’s 100-years-old stained glass pieces were salvaged when it burned on July 21. 2016. What Statesville Stained Glass did was literally put

Humpty Dumpty back together again. “Any glass that was broken was duplicated by Kokomo Opalescent Glass Co. in Indiana,” Wooten said. “The glass that was not broken was cleaned and put in new frames.” The large picture window of Jesus that will be facing Main St. was made from scratch by Statesville Stained Glass. The window was designed by Leslie Wicker. Artist Johnny Sherrill did the full-sized rendering. Marty Freeman and Laci Wooten painted the scene on the glass. “There’s not another one like it anywhere,” said Wooten. Three small spotlights inside the church will shine on the window at night, making it highly visible and glowing to folks as they pass by outside. The panel’s theme is “Come Unto Me”. Statesville Stained Glass employees Ryan Tulbert (left) and Robbie Edwards get set to install a panel in the front window of See STAINED GLASS, Page 6 First Baptist Mt. Holly. Photo by Alan Hodge

Belmont’s Auten-Stowe American Legion Post 144 building dates to around 1952 and was starting to look a little tired. Seeing that situation, Boy Scout Troop 56 member Jesse Whaley, 17, decided to pitch in and do some fixing up on the place for his Eagle Scout project. Whaley is a South Point

This year’s annual Belmont Christmas parade will be a little different. The City of Belmont and the Montcross Area Chamber will present the “Cruise Thru Christmas – Belmont Style” event on Tuesday, December

1, 2020 from 3:30 to 5:00 pm. In order to provide a safe environment due to the COVID pandemic, this year’s parade will be a drive thru event. This means that decorated floats and other entries will See CRUISE, Page 4

Belmont PD receives prestigious award High senior who has been in scouting since first grade. His troop is based at Belmont’s First United Methodist Church. “My dad was a scout when he was growing up,” Whaley said. “It’s a family tradition. Another reason I joined was to make friends and learn people skills.” Whaley said he was prompted to take on the Post

Boy Scout Troop 56 member Jesse Whaley, 17, has been working hard to beautify the Belmont VFW post for his Eagle Scout project. Photo by Alan Hodge 144 project because of a desire to honor veterans. “I wanted to give back to the veterans who defend out

The Belmont Police Department received its advanced law enforcement accreditation from the Commission on the Accreditation of Law Enforcement Agencies (CALEA) after attending a CALEA committee hearing on Friday. This award comes after an intensive review of the agency’s policies, procedures, and proofs of compliance. It

Wrap up your advertising! Call Mayra Littman to discuss your options today! 704-472-7892