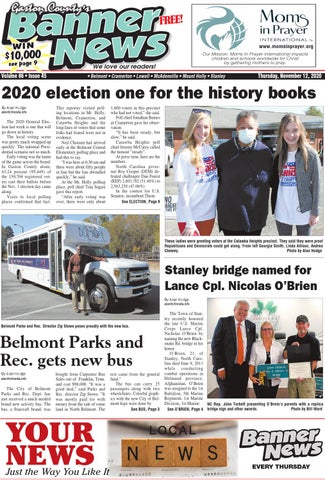 2020 election one for the history books By Alan Hodge alan@cfmedia.info

The 2020 General Election last week is one that will go down in history. The local voting scene was pretty much wrapped up quickly. The national Presidential scenario not so much. Early voting was the name of the game across the board. In Gaston County alone, 63.24 percent (95,449) of the 150,704 registered voters cast their ballots before the Nov. 3 election day came along. Visits to local polling places confirmed that fact.

This reporter visited polling locations in Mt. Holly, Belmont, Cramerton, and Catawba Heights and the long lines of voters that some folks had feared were not in evidence. Neil Chastain had arrived early at the Belmont Central Elementary polling place and had this to say. “I was here at 6:30 am and there were about fifty people in line but the line dwindled quickly,” he said. At the Mt. Holly polling place, poll chief Tina Sagasi gave this report. “After early voting was over, there were only about

1,600 voters in this precinct who had not voted,” she said. Poll chief Jonathan Baines at Cramerton gave his observation. “It has been steady, but slow,” he said. Catawba Heights poll chief Jeremy McCarey called the turnout “steady”. At press time, here are the numbers. North Carolina governor Roy Cooper (DEM) defeated challenger Dan Forest (REP) 2,803,782 (51.48%) to 2,563,258 (47.06%) In the contest for U.S. Senator, incumbent Thom See ELECTION, Page 6

These ladies were greeting voters at the Catawba Heights precinct. They said they were proof Republicans and Democrats could get along. From left Georgia Smith, Linda Allison, Andrea Chewey. Photo by Alan Hodge

The City of Belmont Parks and Rec. Dept. has just received a much needed brand new activity bus. The bus, a Starcraft brand, was

bought from Carpenter Bus Sales out of Franklin, Tenn. and cost $98,000. “It was a good deal,” said Parks and Rec. director Zip Stowe. “It was mostly paid for with money from the sale of some land in North Belmont. The

rest came from the general fund.” The bus can carry 25 passengers along with two wheelchairs. Colorful graphics with the new City of Belmont logo were done by See BUS, Page 3