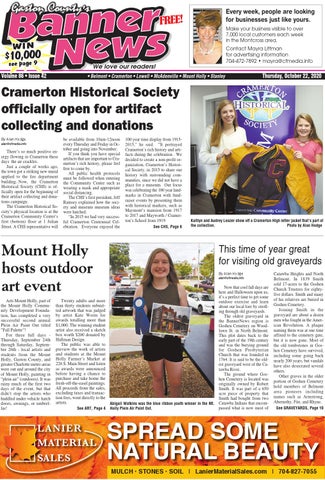 Every week, people are looking for businesses just like yours.

Make your business visible to over 7,000 local customers each week in the Montcross area.

There’s so much positive energy flowing in Cramerton these days the air crackles. Just a couple of weeks ago, the town got a striking new mural applied to the fire department building. Now, the Cramerton Historical Society (CHS) is officially open for the beginning of their artifact collecting and donations campaign. The Cramerton Historical Society’s physical location is at the Cramerton Community Center’s first (bottom) floor at 1 Julian Street. A CHS representative will

be available from 10am-12noon every Thursday and Friday in October and going into November. If you think you have special artifacts that are important to Cramerton’s rich history, please feel free to come by. All public health protocols must be followed when entering the Community Center such as wearing a mask and appropriate social distancing. The CHS’s first president, Jeff Ramsey explained how the society and museum museum ideas were hatched. “In 2015 we had very successful Cramerton Centennial Celebration. Everyone enjoyed the

Mount Holly hosts outdoor art event Arts Mount Holly, part of the Mount Holly Community Development Foundation, has completed a very successful second annual Plein Air Paint Out titled “Fall Palette”! For three full days Thursday, September 24th through Saturday, September 26th - local artists and students from the Mount Holly, Gaston County, and greater Charlotte metro areas were out and around the city of Mount Holly, painting in “plein air” (outdoors). It was rainy much of the first two days of the event, but that didn’t stop the artists who huddled under vehicle hatch doors, awnings, or umbrellas!

Twenty adults and more than thirty students submitted artwork that was judged by artist Kate Worm for awards totalling more than $1,000. The winning student artist also received a sketch box worth $200 donated by Hallman Design. The public was able to preview the work of artists and students at the Mount Holly Farmer’s Market at 226 S. Main Street and listen as awards were announced before having a chance to purchase and take home the fresh-off-the-easel paintings. All proceeds from the sales, excluding taxes and transaction fees, went directly to the artists. See ART, Page 4

100 year time display from 19152015,” he said. “It portrayed Cramerton’s rich history and artifacts during the celebration . We decided to create a non-profit organization, Cramerton’s Historical Society, in 2015 to share our history with surrounding communities, since we did not have a place for a museum. Our focus was celebrating the 100 year landmarks in Cramerton with fundraiser events by presenting them with historical markers, such as Maymont’s mansion from 1917 to 2017 and Mayworth / Cramerton’s School from 1919 See CHS, Page 6

Kaitlyn and Audrey Leazer show off a Cramerton High letter jacket that’s part of the collection. Photo by Alan Hodge

This time of year great for visiting old graveyards By Alan Hodge alan@cfmedia.info

Now that cool fall days are here and Halloween upon us, it’s a perfect time to get some outdoor exercise and learn about our local lore by strolling through old graveyards. The oldest graveyard in the BannerNews region is Goshen Cemetery on Woodlawn St. in North Belmont. This plot dates back to the early part of the 19th century and was the burying ground for Goshen Presbyterian Church that was founded in 1764. It is said to be the oldest graveyard west of the Catawba River. The ground where Goshen Cemetery is located was originally owned by Robert Smith. It was part of a 650 acre piece of property that Smith had bought from two Abigail Watkins was the blue ribbon youth winner in the Mt. Catawba Indians that encompassed what is now most of Holly Plein Air Paint Out.

Catawba Heights and North Belmont. In 1839 Smith sold 17-acres to the Goshen Church Trustees for eightyfive dollars. Smith and many of his relatives are buried in Goshen Cemetery. Joining Smith in the graveyard are about a dozen men who fought in the American Revolution. A plaque naming them was at one time affixed to the cemetery gate, but it is now gone. Most of the old tombstones in Goshen Cemetery have survived, including some going back nearly 200 years, but vandals have also desecrated several others. Other graves in the older portion of Goshen Cemetery hold members of Belmont area pioneers including names such as Armstrong, Abernethy, Fite, and Rhyne. See GRAVEYARDS, Page 10