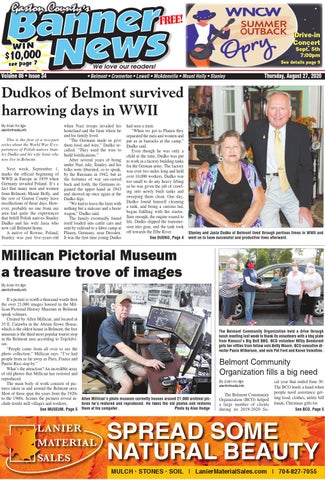 when Nazi troops invaded his homeland and the farm where he and his family lived. “The Germans made us give them food and wire,” Dudko recalled. “They used the wire to build fortifications.” After several years of being under Nazi rule, Stanley and his folks were liberated, so to speak, by the Russians in 1942, but as the fortunes of war see-sawed back and forth, the Germans regained the upper hand in 1943 and showed up once again at the Dudko digs. “We had to leave the farm with nothing but a suitcase and a horse wagon,” Dudko said. The family eventually found itself loaded into cattle cars and sent by railroad to a labor camp at Plauen, Germany, near Dresden. It was the first time young Dudko

had seen a train. “When we got to Plauen they separated the men and women and put us in barracks at the camp,” Dudko said. Even though he was only a child at the time, Dudko was put to work in a factory building tanks for the German army. The factory was over two miles long and held over 10,000 workers. Dudko was too small to do any heavy lifting so he was given the job of crawling into newly built tanks and sweeping them clean. One day, Dudko found himself cleaning a tank, and being a curious lad, began fiddling with the starter. Sure enough, the engine roared to life, Dudko slipped the transmission into gear, and the tank took off towards the Elbe River. See DUDKO, Page 4

Stanley and Jasia Dudko of Belmont lived through perilous times in WWII and went on to have successful and productive lives afterward.

If a picture is worth a thousand words then the over 21,000 images housed in the Millican Pictorial History Museum in Belmont speak volumes. Created by Allen Millican, and located at 35 E. Catawba in the Abram Stowe House, which is the oldest house in Belmont, the free museum is the third most popular tourist stop in the Belmont area according to TripAdvisor. “People come from all over to see the photo collection,” Millican says. “I’ve had people from as far away as Paris, France and Puerto Rico stop by.” What’s the attraction? An incredible array of old photos that Millican has restored and reproduced. The main body of work consists of pictures taken in and around the Belmont area. Most of these span the years from the 1920s to the 1960s. Scenes the pictures reveal in- Allen Millican’s photo museum currently houses around 21,000 archival picclude textile mill villages and workers, tures he’s restored and reproduced. He takes the old photos and restores Photo by Alan Hodge See MUSEUM, Page 5 them at his computer.