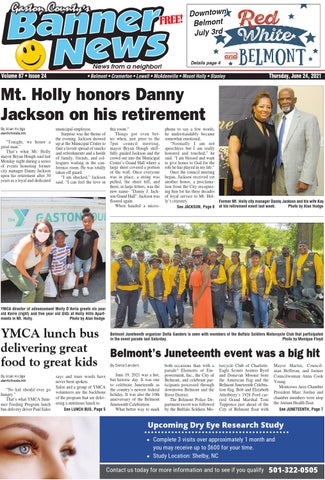 “Tonight, we honor a great man.” That’s what Mt. Holly mayor Bryan Hough said last Monday night during a series of events honoring former city manager Danny Jackson upon his retirement after 30 years as a loyal and dedicated

municipal employee. Surprise was the theme of the evening. Jackson showed up at the Municipal Center to find a lavish spread of snacks and refreshments and a horde of family, friends, and colleagues waiting in the conference room. He was totally taken off guard. “I am shocked,” Jackson said. “I can feel the love in

this room.” Things got even better when, just prior to the 7pm council meeting, mayor Bryan Hough skillfully guided Jackson and the crowd out into the Municipal Center’s Grand Hall where a large sheet covered a portion of the wall. Once everyone was in place, a string was pulled, the sheet fell, and there, in large letters, was the new name- “Danny J. Jackson Grand Hall”. Jackson was floored again. When handed a micro-

phone to say a few words, he understandably became somewhat emotional. “Normally I am not speechless but I am really honored and touched,” he said. “I am blessed and want to give honor to God for the role he has played in my life.” Once the council meeting began, Jackson received yet another honor, a proclamation from the City recognizing him for his three decades of loyal service to Mt. Holly’s citizenry. Former Mt. Holly city manager Danny Jackson and his wife Kay Photo by Alan Hodge See JACKSON, Page 6 at his retirement event last week.

says and truer words have never been spoken. Salos and a group of YMCA volunteers are the backbone of the program that are delivering a nutritious lunch to See LUNCH BUS, Page 5

June 19, 2021 was a hot, but historic day. It was one to celebrate Juneteenth as the country’s newest federal holiday. It was also the 10th anniversary of the Belmont Juneteenth Celebration. What better way to mark

both occasions than with a parade? Elements of Empowerment, Inc., the City of Belmont, and celebrant participants processed through downtown Belmont and the River District. The Belmont Police Department escort was followed by the Buffalo Soldiers Mo-

Upcoming Dry Eye Research Study Complete 3 visits over approximately 1 month and you may receive up to $600 for your time. Study Location: Shelby, NC