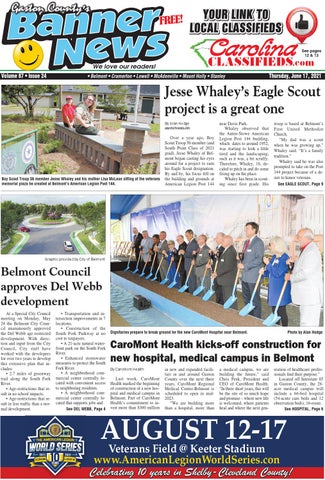 YOUR LINK TO LOCAL CLASSIFIEDS

Jesse Whaley’s Eagle Scout project is a great one By Alan Hodge alan@cfmedia.info

Over a year ago, Boy Scout Troop 56 member (and South Point Class of 2021 grad), Jesse Whaley of Belmont began casting his eyes around for a project to earn his Eagle Scout designation. By and by, his focus fell on the building and grounds at American Legion Post 144

near Davis Park. Whaley observed that the Auten-Stowe American Legion Post 144 building, which dates to around 1952, was starting to look a little tired and the landscaping, such as it was, a bit scruffy. Therefore, Whaley, 18, decided to pitch in and do some fixing up on the place. Whaley has been in scouting since first grade. His

troop is based at Belmont’s First United Methodist Church. “My dad was a scout when he was growing up,” Whaley said. “It’s a family tradition.” Whaley said he was also prompted to take on the Post 144 project because of a desire to honor veterans. See EAGLE SCOUT, Page 9

Graphic provided by City of Belmont

Belmont Council approves Del Webb development At a Special City Council meeting on Monday, May 24 the Belmont City Council unanimously approved the Del Webb age restricted development. With direction and input from the City Council, City staff have worked with the developers for over two years to develop this extensive plan that includes: • 2.7 miles of greenway trail along the South Fork River. • Age-restrictions that result in no school impacts. • Age-restrictions that result in less traffic than a normal development.

Dignitaries prepare to break ground for the new CaroMont Hospital near Belmont.

in new and expanded facilities in and around Gaston County over the next three years, CaroMont Regional Medical Center-Belmont is scheduled to open in mid2023. “We are building more than a hospital, more than

a medical campus, we are building the future,” said Chris Peek, President and CEO of CaroMont Health. “In three short years, this will be the site of so much hope and promise – where new life is welcomed, where patients heal and where the next gen-