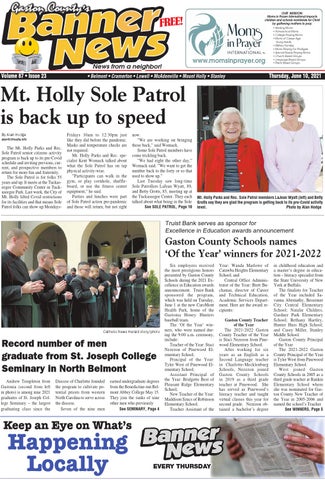 Mt. Holly Sole Patrol is back up to speed By Alan Hodge alan@cfmedia.info

The Mt. Holly Parks and Rec. Sole Patrol senior citizens activity program is back up to its pre-Covid schedule and inviting previous, current, and prospective members to return for more fun and fraternity. The Sole Patrol is for folks 55 years and up. It meets at the Tuckaseegee Community Center in Tuckaseegee Park. Last week, the City of Mt. Holly lifted Covid restrictions for its facilities and that means Sole Patrol folks can show up Mondays-

Fridays 10am to 12:30pm just like they did before the pandemic. Masks and temperature checks are not required. Mt. Holly Parks and Rec. specialist Kent Womack talked about what the Sole Patrol has on tap physical activity-wise. “Participants can walk in the gym, or play cornhole, shuffleboard, or use the fitness center equipment,” he said. Parties and lunches were part of Sole Patrol action pre-pandemic and those will return, but not right

now. “We are working on bringing those back,” said Womack. Some Sole Patrol members have come trickling back. “We had eight the other day,” Womack said. “We want to get the number back to the forty or so that used to show up.” Last Tuesday saw long-time Sole Patrollers LaJean Wyatt, 89, and Betty Grotts, 85, meeting up at the Tuckaseegee Center. They each talked about what being in the Sole See SOLE PATROL, Page 10

Mt. Holly Parks and Rec. Sole Patrol members LaJean Wyatt (left) and Betty Grotts say they are glad the program is getting back to its pre-Covid activity level. Photo by Alan Hodge

Diocese of Charlotte founded the program to cultivate potential priests from western North Carolina to serve across the diocese. Seven of the nine men

earned undergraduate degrees from the Benedictine-run Belmont Abbey College May 15. They join the ranks of nine other men who previously See SEMINARY, Page 4

Year: Wanda Marlowe of Catawba Heights Elementary School; and Central Office Administrator of the Year: Brett Buchanan, director of Career and Technical Education, Academic Services Department. Here are the award recipients: Gaston County Teacher of the Year The 2021-2022 Gaston County Teacher of the Year is Staci Nezezon from Pinewood Elementary School. After working for six years as an English as a Second Language teacher in Charlotte-Mecklenburg Schools, Nezezon joined Gaston County Schools in 2019 as a third grade teacher at Pinewood. She has served as Pinewood’s literacy teacher and taught virtual classes this year for second grade. Nezezon obtained a bachelor’s degree