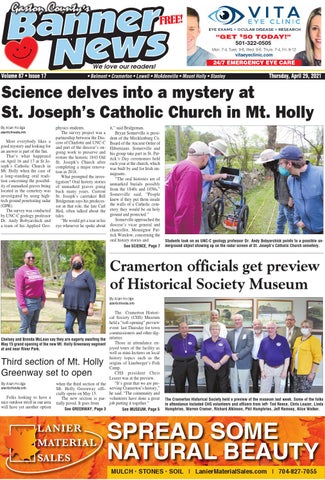 Most everybody likes a good mystery and looking for an answer is part of the fun. That’s what happened on April 16 and 17 at St Joseph’s Catholic Church in Mt. Holly when the case of a long-standing oral tradition concerning the possibility of unmarked graves being located in the cemetery was investigated by using hightech ground penetrating radar (GPR). The survey was conducted by UNC-C geology professor Dr. Andy Bobyarchick and a team of his Applied Geo-

physics students. The survey project was a partnership between the Diocese of Charlotte and UNC-C and part of the diocese’s ongoing work to preserve and restore the historic 1843 Old St. Joseph’s Church after completing a major renovation in 2018. What prompted the investigation? Oral history stories of unmarked graves going back many years. Current St. Joseph’s caretaker Bill Bridgeman says his predecessor in that role, the late Carl Heil, often talked about the tales. “He would get a tear in his eye whenever he spoke about

it,” said Bridgeman. Bryan Somerville is president of the Mecklenburg Co. Board of the Ancient Order of Hibernians. Somerville and his group take part in St. Patrick’s Day ceremonies held each year at the church, which was built by and for Irish immigrants. “The oral histories are of unmarked burials possibly from the 1840s and 1850s,” Somerville said. “People knew if they put them inside the walls of a Catholic cemetery they would be on holy ground and protected.” Somerville approached the diocese’s vicar general and chancellor, Monsignor Patrick Winslow, concerning the oral history stories and See SCIENCE, Page 7

Chelsey and Brenda McLean say they are eagerly awaiting the May 15 grand opening of the new Mt. Holly Greenway segment at and near River Park.

when the third section of the Mt. Holly Greenway officially opens on May 15. The new section is partially paved. It goes from See GREENWAY, Page 3

The Cramerton Historical Society (CHS) Museum held a “soft opening” preview event last Thursday for town commissioners and other dignitaries. Those in attendance enjoyed tours of the facility as well as mini-lectures on local history topics such as the origins of Lineberger’s Fish Camp. CHS president Chris Leazer was at the preview. “It’s great that we are preserving Cramerton’s history,” he said. “The community and volunteers have done a great job putting it together.” See MUSEUM, Page 5