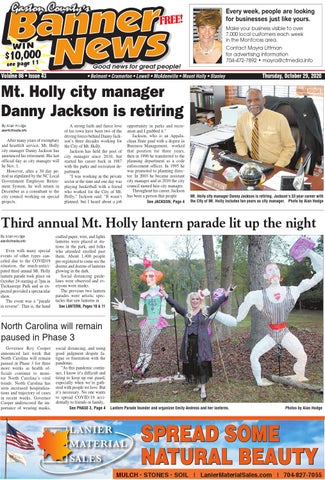 Every week, people are looking for businesses just like yours.

Make your business visible to over 7,000 local customers each week in the Montcross area.

After many years of exemplary and heartfelt service, Mt. Holly city manager Danny Jackson has announced his retirement. His last official day as city manager will be Nov. 1. However, after a 30 day period as stipulated by the NC Local Government Employee Retirement System, he will return in December as a consultant to the city council working on special projects.

A strong faith and fierce love of his town have been two of the driving forces behind Danny Jackson’s three decades working for the City of Mt. Holly. Jackson has held the post of city manager since 2010, but started his career back in 1987 with the parks and recreation department. “I was working in the private sector at the time and one day was playing basketball with a friend who worked for the City of Mt. Holly,” Jackson said. “It wasn’t planned, but I heard about a job

opportunity in parks and recreation and I grabbed it.” Jackson, who is an Appalachian State grad with a degree in Business Management, worked that position for three years, then in 1990 he transferred to the planning department as a code enforcement officer. In 1995 he was promoted to planning director. In 2003 he became assistant city manager and in 2010 the city council named him city manager. Throughout his career, Jackson has been a person that people See JACKSON, Page 4

Even with many special events of other types canceled due to the COVID19 situation, the much-anticipated third annual Mt. Holly lantern parade took place on October 24 starting at 7pm in Tuckaseege Park and as expected provided a spectacular show. The event was a “parade in reverse”. That is, the hand

crafted paper, wire, and lights lanterns were placed at stations in the park, and folks who attended strolled past them. About 1,400 people pre-registered to come see the dozens and dozens of lanterns glowing in the dark. Social distancing guidelines were observed and everyone wore masks. The previous two lantern parades were artistic spectacles that saw lanterns in See LANTERN, Pages 10 &amp; 11

social distancing, and using good judgment despite fatigue or frustration with the pandemic. “As this pandemic continues, I know it’s difficult and tiring to keep up our guard, especially when we’re gathered with people we love. But it’s necessary. No one wants to spread COVID-19 accidentally to friends or family, See PHASE 3, Page 4

Lantern Parade founder and organizer Emily Andress and her lanterns.