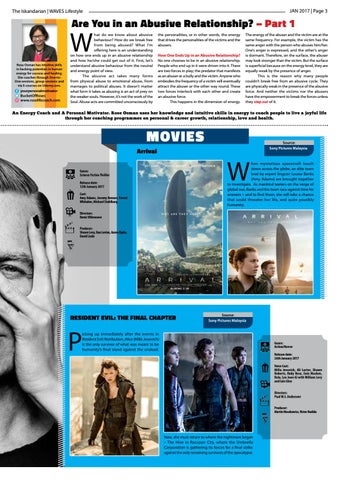 Are You in an Abusive Relationship? – Part 1

W Rose Osman has intuitive skills in hacking potentials in human energy for success and healing. She coaches through One-toOne sessions, group sessions and via E-courses on Udemy.com.

hat do we know about abusive behaviour? How do we break free from being abused? What I’m offering here is an understanding on how one ends up in an abusive relationship and how he/she could get out of it. First, let’s understand abusive behaviour from the neutral and energy point of view. The abusive act takes many forms from physical abuse to emotional abuse, from marriages to political abuses. It doesn’t matter what form it takes as abusing is an act of prey on the weaker souls. However, it’s not the work of the Soul. Abuse acts are committed unconsciously by

the personalities, or in other words, the energy that drives the personalities of the victims and the abusers. How One Ends Up in an Abusive Relationship? No one chooses to be in an abusive relationship. People who end up in it were driven into it. There are two forces in play; the predator that manifests as an abuser or a bully and the victim. Anyone who embodies the frequency of a victim will eventually attract the abuser or the other way round. These two forces interlock with each other and create an abusive force. This happens in the dimension of energy.

The energy of the abuser and the victim are at the same frequency. For example, the victim has the same anger with the person who abuses him/her. One’s anger is expressed, and the other’s anger is dormant. Therefore, on the surface, the abuser may look stronger than the victim. But the surface is superficial because on the energy level, they are equally weak by the presence of anger. This is the reason why many people couldn’t break free from an abusive cycle. They are physically weak in the presence of the abusive force. And neither the victims nor the abusers have the empowerment to break the forces unless they step out of it.

An Energy Coach and A Personal Motivator. Rose Osman uses her knowledge and intuitive skills in energy to coach people to live a joyful life through her coaching programmes on personal &amp; career growth, relationship, love and health.

hen mysterious spacecraft touch down across the globe, an elite team lead by expert linguist Louise Banks (Amy Adams) are brought together to investigate. As mankind teeters on the verge of global war, Banks and the team race against time for answers – and to find them, she will take a chance that could threaten her life, and quite possibly humanity.

icking up immediately after the events in Resident Evil: Retribution, Alice (Milla Jovovich) is the only survivor of what was meant to be humanity’s final stand against the undead.

Now, she must return to where the nightmare began – The Hive in Raccoon City, where the Umbrella Corporation is gathering its forces for a final strike against the only remaining survivors of the apocalypse. 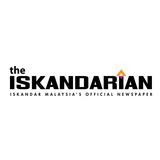