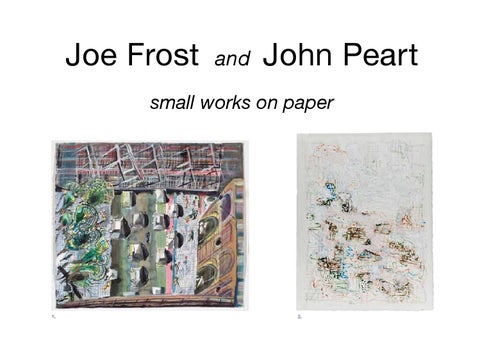 The weaving together of elements is unique in each, and while I don’t think

deaths of painting and of the author, and the end of art itself were contested

all contributed to the vigour of his ongoing production.

by historical endings and theories of crisis in art. The end of modernism, the issues few artists would have been able to ignore during the ’60s and early ’70s. Even now, forty years later, I think that those ruptures exert a certain

pressure on artists, engendering anxiety about a creative act that is actually

the expression of a simple, necessary impulse. Peart, as I imagine him in the early years of his career, transcended the crisis. Following the debates and

early modernist, with no reason to doubt that the future could receive him,

no reason to deny his enjoyment of all that is sensuous and enchanting in the form, or to curtail the play of his imagination.

organism, each phase of work propelling the next and extending the scope

of his originality, and in this way he demonstrated the newly urgent truth that the artist at work – not the museum or academy - is the point of continuity

between art’s history and its future. I hardly need to say that it’s an honour to exhibit alongside him.

most of them works on paper. I don’t know what Peart would say about it, but when line conveys a thought about form, it’s drawing; once form becomes

physically present through colour and layering we’re in the realm of painting. But however we might categorise them, the works are all experimental in character, commencing openly, incorporating unforeseen possibilities.

In Peart’s, most of which are from the 1980s with a couple from the ’90s and some from the last few years, I see forms and effects that are familiar from

well-known paintings in new configurations, or prised apart from each other

to perform alone; and ideas being generated, clarified or perhaps recalled in retrospect.

they were sketches to be followed exactly in another medium, I’m sure they When I first saw his work in the 1990s its so-called abstract properties –

relationships of scale for example, tonal transitions and variegated textures,

developed over years of reworking - conveyed a powerful sense of reality; an atmospheric space that evoked Earth and the cosmos as seen in the mind’s

eye. Like the work of some of his favourite artists (Rembrandt, Klee, Picasso, Fairweather, McCahon) in certain masterpieces by Peart the distinction

between abstraction and figuration ceases to mean anything because the

painting draws upon such a broad span of experience and perception that it seems to encompass everything.

each artist with 21 works on paper

landscape, going back to the studio and working directly with forms on

canvas was confirmed. I still think that any painter whose work is worth

like John Peart took for granted, and in the first phase of my career I have

worked toward an approach to figuration based more upon the processes and materials of 20th century painting than conventional representation;

in which subject matter can emerge through a synthesis of elements, with the potential for development, transformation and discovery that implies.

from which a figure or landscape may emerge, and lately I have been starting

do away with drawing from life. The range of observations that can rise to

drawings with form rather than from a subject; although I doubt I will ever the surface through painting or drawing seems unlimited to me, and I am

continually excited to recognise subject matter in configurations that I have arrived at quite circuitously: building an image with intent, burying it out of dissatisfaction and restoring it in an altered state. Joe Frost  Sydney 2014

"Some of our works in this exhibition are drawings but I would prefer to call most of them works on paper. I don't know what Peart would say about it, but when a line conveys a thought about form, it's drawing; once form becomes physically present through colour and layering we're in the realm of painting. But however we might categorise them, the works are all experimental in character, commencing openly, incorporating unforseen possibilities." Joe Frost, Sydney, 2014