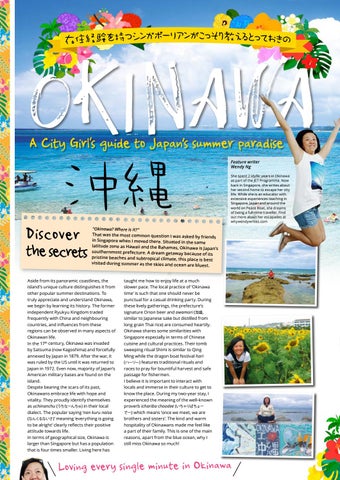 Feature writer Wendy Ng She spent 2 idyllic years in Okinawa as part of the JET Programme. Now back in Singapore, she writes about her second home to escape her city life. While she is an educator with extensive experiences teaching in Singapore, Japan and around the world on Peace Boat, she dreams of being a full-time traveller. Find out more about her escapades at whywendywrites.com

“Okinawa? Where is it?” That was the most common question I was asked by friends in Singapore when I moved there. Situated in the same latitude zone as Hawaii and the Bahamas, Okinaw a is Japan’s southernmost prefec ture. A dream getaway becaus e of its pristine beaches and subtropical climate, this place is best visited during summer as the skies and ocean are bluest.

Aside from its panoramic coastlines, the island’s unique culture distinguishes it from other popular summer destinations. To truly appreciate and understand Okinawa, we begin by learning its history. The former independent Ryukyu Kingdom traded frequently with China and neighbouring countries, and inﬂuences from these regions can be observed in many aspects of Okinawan life. In the 17th century, Okinawa was invaded by Satsuma (now Kagoshima) and forcefully annexed by Japan in 1879. After the war, it was ruled by the US until it was returned to Japan in 1972. Even now, majority of Japan’s American military bases are found on the island. Despite bearing the scars of its past, Okinawans embrace life with hope and vitality. They proudly identify themselves as uchinanchu (うちなーんちゅ) in their local dialect. The popular saying ‘nan kuru naisa (なんくるないさ)’ meaning ‘everything is going to be alright’ clearly reﬂects their positive attitude towards life. In terms of geographical size, Okinawa is larger than Singapore but has a population that is four times smaller. Living here has

taught me how to enjoy life at a much slower pace. The local practice of ‘Okinawa time’ is such that one should never be punctual for a casual drinking party. During these lively gatherings, the prefecture’s signature Orion beer and awamori (泡盛 , similar to Japanese sake but distilled from long grain Thai rice) are consumed heartily. Okinawa shares some similarities with Singapore especially in terms of Chinese cuisine and cultural practices. Their tomb sweeping ritual Shimi is similar to Qing Ming while the dragon boat festival hari (ハーリー) features traditional rituals and races to pray for bountiful harvest and safe passage for ﬁshermen. I believe it is important to interact with locals and immerse in their culture to get to know the place. During my two-year stay, I experienced the meaning of the well-known proverb ichariba choodee (いちゃりばちょー でー) which means ‘once we meet, we are brothers and sisters’. The kind and warm hospitality of Okinawans made me feel like a part of their family. This is one of the main reasons, apart from the blue ocean, why I still miss Okinawa so much!

Loving every single minute in Okinawa 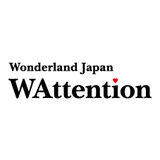