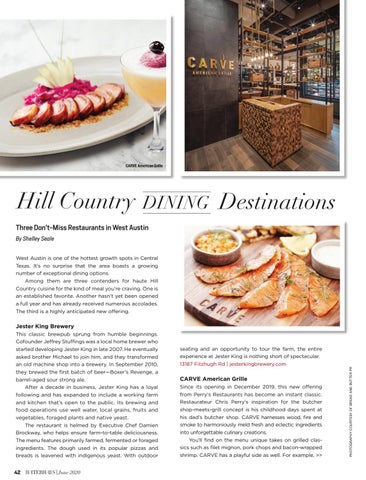 Three Don’t-Miss Restaurants in West Austin By Shelley Seale West Austin is one of the hottest growth spots in Central Texas. It’s no surprise that the area boasts a growing number of exceptional dining options. Among them are three contenders for haute Hill Country cuisine for the kind of meal you’re craving. One is an established favorite. Another hasn’t yet been opened a full year and has already received numerous accolades. The third is a highly anticipated new offering.

seating and an opportunity to tour the farm, the entire experience at Jester King is nothing short of spectacular. 13187 Fitzhugh Rd | jesterkingbrewery.com

CARVE American Grille Since its opening in December 2019, this new offering from Perry’s Restaurants has become an instant classic. Restaurateur Chris Perry’s inspiration for the butcher shop-meets-grill concept is his childhood days spent at his dad’s butcher shop. CARVE harnesses wood, fire and smoke to harmoniously meld fresh and eclectic ingredients into unforgettable culinary creations. You’ll find on the menu unique takes on grilled classics such as filet mignon, pork chops and bacon-wrapped shrimp. CARVE has a playful side as well. For example, &gt;&gt;

This classic brewpub sprung from humble beginnings. Cofounder Jeffrey Stuffings was a local home brewer who started developing Jester King in late 2007. He eventually asked brother Michael to join him, and they transformed an old machine shop into a brewery. In September 2010, they brewed the first batch of beer—Boxer’s Revenge, a barrel-aged sour strong ale. After a decade in business, Jester King has a loyal following and has expanded to include a working farm and kitchen that’s open to the public. Its brewing and food operations use well water, local grains, fruits and vegetables, foraged plants and native yeast. The restaurant is helmed by Executive Chef Damien Brockway, who helps ensure farm-to-table deliciousness. The menu features primarily farmed, fermented or foraged ingredients. The dough used in its popular pizzas and breads is leavened with indigenous yeast. With outdoor

The "Dining" issue of Waterways shines the spotlight on up-and-coming as well as long-beloved local restaurants. Find your next favorite restaurant, lounge or bar with the help of the West Austin restaurant guide, and check the guide to West Austin's breweries, distilleries and wineries for great places to go to let the good times flow. Martha O'Hara Interiors designer Heidi Féliz-Grimm shares ideas for making your dining room your family's favorite place to eat, and stylist Edie Henry offers her insights for investing in your wardrobe the right way. 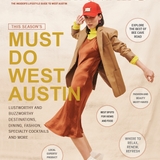