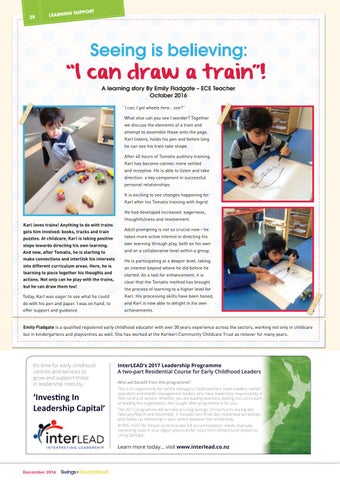 Seeing is believing: “I can draw a train”! A learning story By Emily Fladgate – ECE Teacher October 2016 “ I can, I got wheels here… see?” What else can you see I wonder? Together we discuss the elements of a train and attempt to assemble these onto the page. Karl listens, holds his pen and before long he can see his train take shape. After 40 hours of Tomatis auditory training, Karl has become calmer, more settled and receptive. He is able to listen and take direction: a key component in successful personal relationships. It is exciting to see changes happening for Karl after his Tomatis training with Ingrid. He had developed increased: eagerness, Karl loves trains! Anything to do with trains gets him involved: books, tracks and train puzzles. At childcare, Karl is taking positive steps towards directing his own learning. And now, after Tomatis, he is starting to make connections and interlink his interests into different curriculum areas. Here, he is learning to piece together his thoughts and actions. Not only can he play with the trains, but he can draw them too! Today, Karl was eager to see what he could do with his pen and paper. I was on hand, to offer support and guidance.

thoughtfulness and involvement. Adult prompting is not so crucial now - he takes more active interest in directing his own learning through play, both on his own and on a collaborative level within a group. He is participating at a deeper level, taking an interest beyond where he did before he started. As a tool for enhancement, it is clear that the Tomatis method has brought the process of learning to a higher level for Karl. His processing skills have been honed, and Karl is now able to delight in his own achievements.

Emily Fladgate is a qualified registered early childhood educator with over 30 years experience across the sectors, working not only in childcare but in kindergartens and playcentres as well. She has worked at the Kerikeri Community Childcare Trust as reliever for many years.