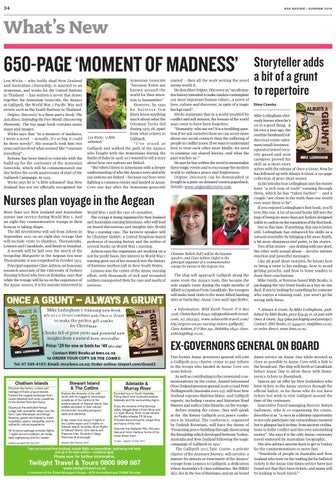 650-PAGE ‘MOMENT OF MADNESS’ Len Wicks – who holds dual New Zealand and Australian citizenship, is married to an Armenian, and works for the United Nations in Thailand – has written a novel that draws together the Armenian Genocide, the Anzacs at Gallipoli, the World War 2 Pacific War and events such as the Death Railway in Thailand. Origins: Discovery’ is a three-part e-book: The Axis Rises; Defending the Free World; Discovering Humanity. The 650-page book contains many maps and images. Wicks says that “in a moment of madness, I wrote a novel – actually, it’s so big it could be three novels”. His research took him two years and involved what seemed like “constant travelling” . Release has been timed to coincide with the build-up for the centenary of the Armenian Genocide, which will be commemorated one day before the 100th anniversary of start of the Gallipoli Campaign, in 1915. Wicks says he is “a little ashamed’ that New Zealand has not yet officially recognised the

Armenian Genocide “because Kiwis are known around the world for their attention to humanities” However, he says he believes few Kiwis know anything much about what the Ottoman Turks did during 1915-18, apart from what relates to Len Wicks: ‘a little Gallipoli. ashamed.’ “I’ve stood at Gallipoli and walked the path of the Anzacs who fought with the Armenians during the Battle of Baku in 1918, so I wanted to tell a story about how our nations are linked. “But when I listen to Armenians with a deeper understanding of who the Anzacs were and why our nations are linked – because our boys were fighting a common enemy and landed at Anzac Cove one day after the Armenian genocide

started – then all the work writing the novel seems worth it. He describes Origins: Discovery as “an alternative history intended to make readers contemplate our most important human values...a novel of love, culture and discovery, in spite of a tragic background”. Wicks maintains that in a world troubled by conflict and self-interest, the lessons of the world wars seem to have been forgotten. “Humanity: who are we? It is a troubling question if we ask ourselves how we can worry more about our social contacts than the suffering of people in conflict zones. If we want to understand how to treat each other more kindly, we need to examine our shared history, and what the past teaches us.” He says he has written the novel to memorialise these tragic events and to encourage the modern world to embrace peace and forgiveness. Origins: Discovery can be downloaded or bought in a print-on-demand version paperback. Details: www.originsdiscovery.com.

Nurses plan voyage in the Aegean More than 500 New Zealand and Australian nurses saw service during World War 1. And an eight-day commemorative voyage in their honour is taking shape. The MS Serenissima will sail from Athens in September 2015 on an eight-day voyage that will include visits to Skiathos, Thessaloniki, Lemnos and Canakkale, and finish in Istanbul. A wreath will be laid over the wreck of the troopship Marquette in the Aegean Sea near Thessaloniki; it was torpedoed in October 1915. Principal organiser Clare Ashton, an honorary research associate of the University of Sydney Nursing School who lives at Hokitika, says that while the voyage will focus on the experience of the Anzac nurses, it is for anyone interested in

World War 1 and the care of casualties. The voyage is being organised by New Zealand and Australian nursing historians, who will lead on-board discussions and insights into World War 1 nursing care. The keynote speaker will be Christine Hallett, a United Kingdom-based professor of nursing history and the author of several books on World War 1 nursing. Ashton says the organisers are working on a not-for-profit basis. Her interest in World War 1 nursing grew out of her research into the history of Karitane mothercraft in New South Wales. Lemnos was the centre of the Anzac nursing effort, with thousands of sick and wounded soldiers transported their for care and medical services.

Ledingham’s Readers of Mike a Grunt, will be first book, Once characters in many familiar with the of these stories.

ters in book, the charac As with the first rized are loosely catego Always a Grunt ed and non-military into military-relat uncategorized also a couple of yarns. There are nally intense. emotio them of stories, both with raw Story, which deals They are Nessy’s a child’s which describes grief, and The Boy, ic priest. abuse by a Cathol struggle with sexual

Chocka full of great yarns and powerful new insights from a natural born storyteller. is exactly of the language Be warned: Some in real life, in the what you’d hear described by Mike circumstances being

story of A heart-rending s victim. an abusive priest’

Chatham Islands Discover the history, culture and heritage of these unique islands. Explore the rugged landscape from ocean beaches and rocky coastlines to the diverse flora and fauna. Staying at the secluded Henga Lodge with wonderful vistas over the farm, Lake Marakapia and Henga Reserve, guests are treated to warm hospitality, peace, tranquillity, and an authentic cultural experience.

Explore the diversity of the wild south with its rugged & wind swept coastlines of the Catlins to the pristine beauty of Stewart Island. See wildlife abundant in their natural environment including penguins, seals and albatross.

Enjoy the wineries of the Barossa Valley, Maggie Beer’s Farm Shop and a 4 night Murray River cruise aboard the Paddle-wheeler PS Murray Princess discovering the unique flora and fauna of the river. Discover the Adelaide Hills, McLaren Vale and Victor Harbour home of the horse drawn tram. 10 days - departs 1st May 2015

Tours are escorted from Auckland, include flights, accommodation, sightseeing and home pick up in the main centres – conditions apply.

The ship will approach Gallipoli along the same route the Anzacs took; this became the sole supply route during the eight months of Allied occupation From Canakkale, the voyagers will make land visits to the main Allied landing sites at Suvla Bay, Anzac Cove and Cape Helles.

Mike Ledingham’s stunning new book Always a Grunt combines with Once a Grunt to make the perfect gift combo for Christmas.

Christine Hallett (left) will be the keynote speaker, and Clare Ashton (right) is the principal organiser of a commemorative voyage for nurses in the Aegean Sea.

Storyteller adds a bit of a grunt to repertoire Dion Crooks Mike Ledingham obviously knows when he’s on to a good thing. A bit over a year ago, the onetime farmhand/soldier/real-estate salesman/small-business operator/armed security guard and now caregiver proved his skill as a short-story writer with the release of Once a Grunt. Now he has followed up with Always A Grunt, a 150-page collection of more short stories. In his introduction Ledingham says his stories have “a rich vein of truth” running through them, which he has “taken further” – and a couple “are closer to the truth than one would ever want them to be”. If you enjoyed Ledingham’s first book, you’ll love this one. A lot of second books fall into the trap of being no more than pot-boilers designed solely to cash in on the reputation of the first book. Not so this time. If anything, this one is better still. Ledingham has enhanced his skills as a natural storyteller by bringing a bit more depth, l stories. a bit more sharpness and point, to his Two of his stories – one dealing with raw grief, the other with sexual abuse – involve intense emotion and powerful messages. Like all good short-storyists, he knows how to bring a twist to his endings, how to avoid getting preachy, and how to leave readers to draw their conclusions. Mike Smith, at Rotorua-based BMS Books, is packaging the two Grunt books as a two-in-one deal. If you’re looking for something for someone who enjoys a relaxing read, you won’t go far wrong with these.

EX-GOVERNORS GENERAL ON BOARD Two former Anzac governors general will join a Gallipoli-2015 charter cruise to pay tribute to the troops who landed in Anzac Cove 100 years before. As well as contributing to the centennial commemorations on the cruise, Anand Satyanand (New Zealand governor general 2006-11) and Peter Hollingworth (Australia 2001-03), will host New Zealand soprano Malvina Major, and Gallipoli experts, including curator and historian Brad Manera and author John Basarin, on the voyage. Before joining the cruise, they will speak at the the Rotary Gallipoli 2015 peace conference in Istanbul. The conference, organised by Turkish Rotarians, will have the theme of ‘Promoting peace-building through showcasing the friendship which developed between Turkey, Australia and New Zealand following the tragic campaign of Gallipoli in 1915’. The Gallipoli-2015 Epic Cruise, a private charter of the Azamara Journey, will involve: a minute-by-minute re-enactment of the Anzacs’ voyage from Lemnos to Gallipoli; a dedication where Australia’s E-class submarine. the HMAS AE2, lies in the Sea of Marmara; and an on-board

dawn service on Anzac Day while moored as close as possible to Anzac Cove with a link to the broadcast. The ship will berth at Canakkale before Anzac Day to allow those with dawnservice tickets to disembark. Spaces are on offer for New Zealanders who have tickets to the Anzac services through the official ballot; or for those who do not have tickets but wish to visit Gallipoli around the time of the centenary. Innovative Travel managing director Robyn Galloway, who is co-organising the cruise, describes it as “a once in a lifetime opportunity to not only participate one extraordinary moment but to glimpse back in time, from ancient civilisations to futile conflict and discover astonishing stories”. She says it is the only Anzac centenary travel endorsed by Australian Geographic. She also advises anyone keen to get to Turkey for the commemorations to move fast. “Hundreds of people in Australia and New Zealand who were on the waiting list for balloted tickets to the Anzac Day dawn service have just found out that they have tickets, and many will be looking to book travel.”